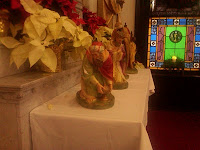 Some 6 years ago this coming summer, I had the great privilege of accompanying a group from my New York parish to World Youth Day in Cologne, Germany. The great Gothic cathedral in Cologne (the model for New York's St. Patrick's Cathedral) was originally built to house the relics of the magi, who, as we just heard [Matthew 2:1-12], came from the east to do homage with gifts of gold, frankincense, and myrrh. The relics of the magi were supposedly brought to Cologne on July 23, 1164, and the cathedral quickly became one of medieval Europe’s major pilgrimage destinations.

Entering our church today, one will have notice an alteration in the nativity scene, where the shepherds have been joined by the long-journeying magi. As our contemporary Christmas holiday has expanded to encompass all of December (and even November), Epiphany (to the extent it gets any attention at all) seems more and more like some sort of vestigial afterthought, a kind of out-of-sync-with-our-culture postscript to Christmas. In fact, however, Epiphany is actually the oldest festival of the Christmas season, older than Christmas Day itself, and still ranks as one of the principal festivals of the Church’s calendar. To add insult to injury, however, here in the United States, the already overshadowed feast has been bumped from its proper day on January 6 to the nearest Sunday – thus reducing the proverbial “12 Days of Christmas” this year from 12 to a mere 8!

In the Eastern Christian Churches, Matthew’s Gospel story about the magi is read on Christmas Day, and Epiphany is primarily a commemoration of Jesus’ baptism, the beginning of his mission as an adult. In the West, we will celebrate Christ’s baptism next Sunday, and focus today almost exclusively on the magi.

That said, the fact is the we actually know next to nothing about the magi themselves – not their names (although tradition has given them the familiar names, Caspar, Melchior, and Balthasar), nor their number (though tradition, based on the gifts itemized in the Gospel, has counted them as 3), nor their exact social status (though tradition, inspired in this case by Psalm 72, has crowned them as kings).
The Gospel tells us none of these things, but it does tell us what it is important for us to know about them. First and foremost, it tells us they were foreigners, that is, Gentile pagans. As such, they represent the multitudes of people – past, present, and future – armed with only natural knowledge, who seek the God who made the world and all that is in it and gives life and breath to everyone, as St. Paul put it in his only recorded sermon to a Gentile pagan audience in the Acts of the Apostles [Acts 17:24-25]. But then the story also tells us that, whatever varied paths different people may start out on, our paths must finally converge in Jesus, the one savior of the world, and that the interpretive key to the story of Jesus is God’s revelation of himself in the history of Israel. Thus, it was to Jerusalem, that the Magi came to learn the full significance of the star – a meaning revealed in the Jewish scriptures, which translated the natural light of a star into the revelation of a person. As Isaiah prophesied in today’s 1st reading [Isaiah 60:1-6]: Nations shall walk by Jerusalem’s light, and kings by her shining radiance.

By way of warning, however, the story also illustrates how easily we may miss the point. When Herod heard the magi, he was greatly troubled and all Jerusalem with him. Notice, they were not overjoyed like the magi, but troubled! What troubled them? What made such good news seem like bad news? And then there were the scholars whom Herod consulted. They quoted the scripture correctly, but they just didn’t get it. For all their abundant academic knowledge of the subject, they seemed to lack any real knowledge of the kind that mattered. So none of them did they obvious thing – go to Bethlehem and do Jesus homage. Only the pagan magi did that!

The magi, on the other hand, were overjoyed, not troubled, and so set out as true pilgrims – and on entering the house they saw the child with Mary his mother and prostrated themselves and did him homage. In the old liturgy, everyone was directed to genuflect at those words – as if to bring the point of the story physically home and so cause us to identify personally with the pilgrim magi.
As for the magi, we never hear about them again. We know only that they departed for their country by another way. Nativity scenes sometimes seem, so to speak, frozen in time. Everybody stays stationary – at least until it’s time to put the figures all back in the closet. But the real magi didn’t just stay put, anymore than the shepherds did. They went back to wherever they had lived before, but they departed for their country by another way. They went back to whatever they had been doing before, but they would never be the same again. And, thanks to Christ’s coming into our world, we too must be different now from what we would otherwise have been.

Every January, after the holidays, we return, as we inevitably must, to our ordinary routines – at home, at school, at work, wherever and whatever. Like the magi, however, our challenge is to travel through our ordinary life by another way, because something so special has happened that makes everything different from what it would otherwise have been.

Before there were funeral homes to print parish calendars, Epiphany became the annual occasion in the Roman Liturgy to announce the date of Easter and other important dates in the coming year. None of us, of course, can even begin to foresee what this new year – the Year of Our Lord 2011 – will bring, whether for better or for worse. If this harrowing 1st decade of the 21st century has taught us anything, it should certainly have taught us at least that!

Yet, even as we navigate our way through an uncertain, but certainly challenging present, the Christmas star invites us to imitate the magi – to go on pilgrimage with them to Bethlehem and back again – confident that, whatever else may be the case, the Christmas star will precede us to illuminate every new day of this new year, and so will guide us, first to Christ, and then through Christ on that new way, which, like the magi, we are all of us being invited to find and to follow.