At the Paulist Mother Church 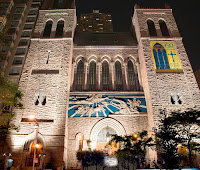 In his monastic journal, The Sign of Jonas, Thomas Merton mentioned how a certain monk who had previously been sent to staff a daughter foundation in Georgia returned to Gethsemani in 1948 to participate in the election of a new abbot. The monk “sat in choir as though he were in heaven,” Merton remarked - and then added, “Afterward I gave him a good hug.”

I confess I’m feeling a little bit like that monk, being back at the Paulist Mother Church in New York (in my old room even) after almost six months. In fact, it will be exactly 6 months ago tomorrow that I celebrated my final Mass at St. Paul's - a joyful Mass of Thanksgiving for 10 blessed years as associate pastor. Now, tomorrow I am scheduled to celebrate Mass here again - for the feast of the Conversion of St. Paul, the patronal feast of this church, this parish, and the Paulist community.

In 1858 (three years after my present parish - Immaculate Conception in Knoxville, TN - was established), Servant of God Isaac Hecker and three other ex-Redemptorists founded the "Society of Missionary Priests of St. Paul the Apostle," known ever since as “The Paulist Fathers.” The Archbishop of New York assigned the new community the care of a new parish to be created on the west side of Manhattan – the parish, like the community itself, placed under the patronage of St. Paul the Apostle. For over 150 years, the Paulists have ministered here in this parish, the life and mission of both the Paulists and the parish being intimately tied together, and both blessed by the patronage of St. Paul the Apostle, the feast of whose Conversion we celebrate this week.

For 126 of those years, the spiritual center of this parish has been its big beautiful church. Within Stanford White’s golden dome above the High Altar is a verse from the Divine Office for St. Paul's feast: “You are a vessel of election, holy apostle Paul.” The response, “Preacher of Truth in the whole world,” is inscribed in the mosaic on the floor at the foot of the sanctuary steps.

For the 1st century or so of this church’s life, communicants coming to the altar rail would see that mosaic, designed in 1920 to highlight the symbols of St. Paul’s apostleship – the book, open to St. Paul’s letter to the Ephesians at the verse, To me, the very least of all the holy ones, this grace was given, to preach to the Gentiles the inscrutable riches of Christ, and the sword, the symbol of St. Paul’s martyrdom. Over at the west end of the south aisle, over the altar dedicated to St. Paul, is Robert Reid’s evocative painting of Paul kneeling calmly and confidently awaiting his imminent martyrdom. Above and below are the famous words from his Second Letter to Timothy: I have fought the good fight, I have finished my course. I have kept the faith!

The event we commemorate this week – the decisive turning-point in Paul’s life – is portrayed above the main entrance to the church in a monumental frieze by Lumen Martin Winter (who also designed the equally monumental tomb at the east end of the north aisle, in which Isaac Hecker was re-buried 52 years ago today). Commonly called Paul’s “conversion,” that event transformed Paul into a disciple of Jesus and an apostle on equal footing with the others, an apostle sent to evangelize, that is, to make disciples of all peoples and nations without exception. That mission is the theme of the other floor mosaic, at the main entrance of the church, which recalls Paul’s preaching outreach to the Greek world in 1st-century Athens.

Paul was not one of the original 12. He wasn’t there when Jesus said to his disciples: “Go into the whole world and proclaim the gospel to every creature.” But he absorbed those words as surely as if they had been addressed to him initially – as we also must do.

That’s what the Paulist Fathers are for, focusing on the Church’s evangelizing mission in an intentional way, continuing the work begun by Isaac Hecker to proclaim the truth of Christ and the Catholic faith throughout this country. The Annual Paulist Appeal (which I am here to preach this coming week) will enable today’s Paulists and the Paulists of tomorrow (whose seminary training the appeal helps support) to continue Isaac Hecker’s mission – here in New York, in East Tennessee, and throughout the North American continent.