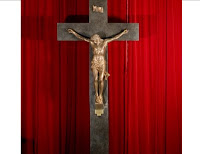 Ten years ago today, St. Paul the Apostle Church in New York (where I was serving at the time as Associate Pastor) was filled to overflowing in response to President Bush’s call for a national day of prayer after the terrorist attack on our country just three days before. Undoubtedly, other churches all over this land were likewise filled that day in response to that same summons.
On that unforgettable September Friday, we were a nation in mourning and a city still in shock. But, when we assembled there in that beautiful church, we did what we as Church always do on the 14th of September. We celebrated the Exaltation of the Holy Cross, a timely reminder that, while human life is inevitably lived in what the Church’s Night Prayer calls a “vale of tears,” Christian life is also always lived in the paradoxical triumph of Christ’s cross.
Historically, this feast commemorates the dedication, on September 13, 335, of the Basilica of the Holy Sepulcher in Jerusalem – built by the Roman Emperor Constantine on the traditionally recognized site of Christ’s death, burial, and resurrection. (That same Constantine had, 23 years earlier, supposedly seen a vision of the Cross - along with the words “in this sign you will conquer” - on the eve of the decisive military victory which made him sole Emperor of Rome). The day after the basilica’s dedication, the relic of the True Cross (discovered by Constantine’s mother, the Empress St. Helena, in 320) was publicly venerated in the new basilica, and so September 14 became the feast celebrated today throughout the Universal Church.
Thus, this feast can be seen as a celebration of Christianity’s triumph over Roman paganism. (The date for the dedication of the Jerusalem Basilica was likely chosen to counteract the anniversary of the dedication of the Temple of Jupiter in Rome - ironically now the site of a monument to the triumph of secularism, united Italy’s 1911 monument to King Victor Emmanuel II). Ultimately, however, what we celebrate today is Christ’s triumph over our sad human history of evil and sin and their countless consequences in the seemingly endless sufferings and tragedies that continue to break our hearts – now transformed once and for all through the triumph of Christ’s cross.
Evil and sin do not happen by accident – and neither did the cross. It didn’t just happen to Jesus one day, like some inexplicable misfortune (events which, when they happen in our own lives, we may all too glibly refer to as “crosses”). Christ’s cross was a direct consequence of Jesus’ redemptive mission – a direct consequence of his confrontation with evil and sin in the world.
The mystery of the cross challenges us to turn away once and for all from our dead-end focus on ourselves, so that we may journey through this treacherous life without fear, under the sign of the cross, which alone can conquer in our war-torn terrorized world.
Homily for the Feast of the Exaltation of the Holy Cross, Immaculate Conception Church, Knoxville, TN, September 14, 2011.
Posted by City Father