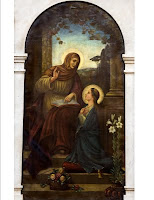 It’s the custom here at Immaculate Conception, Knoxville, at the end of Sunday Mass to ask who is having a birthday during the coming week. At the Saturday evening Mass this past weekend, someone reminded the congregation that included among this week’s birthdays is that of the Blessed Virgin Mary. Indeed, Mary’s birth has been celebrated liturgically on September 8 since at least the 5th century.
Obviously we have no idea what day Mary was in fact born. September 8 is actually the anniversary of the dedication of an ancient church in Jerusalem in honor of Saint Anne, Mary’s mother, on a site popularly associated with Mary’s home. Whatever the merits of that particular geographical tradition, Mary’s birth has long been celebrated on this date – one of only 3 birthdays celebrated in the liturgical calendar (the others being those of Jesus himself on December 25 and St. John the Baptist six months earlier on June 24).
Since the scriptures give us no information whatever about Mary’s birth, the liturgy today gives us on Matthew’s account of Jesus’ ancestry. That is, as one would expect, a patrilineal account that traces Jesus’ descent from Abraham through David to Joseph, Jesus’ legal father; but which, less expectedly, also mentions four mothers (Tamar, Rahab, Ruth, Bathsheba) in the case of each of whom there was something out-of-the-ordinary about the circumstances of her participation in Jesus’ geneology – culminating in a fifth mother, Mary, who would conceive in an even more out-of-the-ordinary manner.
Celebrating Mary’s birth, however, takes us back to before Mary’s miraculously virginal conceiving of Jesus, to a physically much more ordinary seeming event – an almost invisible event which nonetheless somehow summed up centuries of human expectation and hope, all fulfilled finally in this one woman who would truly become what Eve was meant to be, the mother of all the living (Genesis 3:20).
Mary has many feasts in the calendar, each highlighting some specific aspect of her relationship to her Son or her role in the mission of the Church. Today’s observance essentially just highlights her – a seemingly ordinary person born into an ordinary family, who (by the extraordinary grace which filled her from the very first instant of her existence) became an extraordinary instrument for the transformation of human history
How fitting that we celebrate this at what is in all but name the functional beginning of the year - when we start up again all our school and community activities after the interruption of summer! In fact, for 21 consecutive years - from 1947 to 1967 - it was also the Paulist Fathers' practice to celebrate religious profession on this feast.
Our society long ago ceased to mark its months and dates by reference to the Christian calendar. Apart from the devout remnant who frequent daily Mass, few will likely note the occurrence of the feast of Mary’s Birth. Be that as it may, it deserves our attention, as it fittingly graces the beginning of a new cycle of annual activities.
Therefore, let all creation sing and dance and unite to make worthy contribution to the celebration of this day. Let there be one common festival for saints in heaven and men on earth. Let everything, mundane things and those above, join in festive celebration. Today this created world is raised to the dignity of a holy place for him who made all things. The creature is newly prepared to be a divine dwelling place for the Creator (St. Andrew of Crete, 8th century).
Posted by City Father