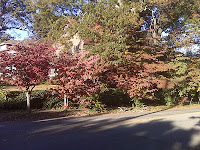 At 5:05 a.m. today, the sun made its annual passage over the equator, an alignment we call the autumn equinox - equinox, because as a consequence the entire planet purportedly experiences a day and a night of equal length, and autumn, because it heralds the season that serves as the transition from the heat of summer to the cold of winter.
Seasons are natural phenomena, of course. On the other hand, how we choose to label and demarcate them is somewhat arbitary - arbitary in the narrower, literal sense of being a matter of some choice, not necessarily in the connotative sense of being completely a matter of whim. The old European "Celtic" calendar counted seasons as the period that surrounded the solar year's 4 cardinal dates (the 2 solstices and the 2 equinoxs). According to that way of computing things, autumn began on August 1, winter on November 1, etc. The medieval calendar reflected this with Lammas Day (until 1960 also the feast of St. Peter in Chains) on August 1, All Saints Day on November 1, Candlemas Day on February 2, and May Day on May 1. Our preferred way of computing the seasons starts with the solstice or equinox. Three of those dates became cardinal points not only of the natural solar year but of the liturgical year, giving us Christmas, Annunciaiton, and the Birth of John the Baptist of December 25, March 25, and June 24 respectively.
Except for Christmas, those religious dates now pass virtually unnoticed now. Indeed, in our post-natural world of atificial lighting and climate-controlled homes and indoor workplaces, these seasonal changes mean so much less than they used to for our ancestors. So the solstices and equinoxes, while still acknowledged, signify relatively little for ordianry life in our resolutely post-natural world. (Of course, climate change and its attendant calamities could make us more sensitive again to the cycle of nature, but since we currently inhabit a political culture that seems hell-bent on denying both the reality and the consequences of climate change even that modest outcome seems unlikely, at least in the short term).
Even so, some seasonal sensibility still sticks with us and still catches our attention. A week or so ago, I was watching a local news program where the lead item was an expected earlier-than-usual begining of the fall colors. While hardly the most pressing issue in the news, fall foliage is one of those vestiges of the natural world that still gets people's attention.
While every season undoutedly has its particular charm, which deserves to be savored, my favorites are autumn and winter. Seasons happen naturally, but the symbolic human associations each season has come to carry are cultural creations. Thus, after the killing heat of summer, the autumn rains brought new life to Israel's desert climate and hence made fall the right time to begin a new year. In so many areas of life (schools, most obviously), fall remains for us the season of new beginnings and resumed activities.
Already in the last week or so, the temperature has droped from the 90s we were still having at the beginning of September. If only it would drop further and really cool off! Then Fall could be experienced in all its glory!
Posted by City Father