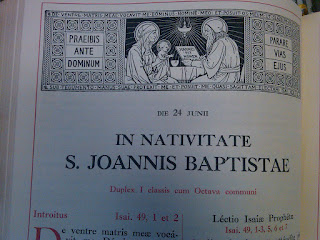 Today, we celebrate a baby’s birth – a common enough event in ordinary human life, but something of a rarity in the Church’s calendar, which typically celebrates saints on the day of their death. Only three special people – Jesus himself, Mary his mother, and St. John the Baptist, whom the Gospel describes as filled with the Holy Spirit even from his mother’s womb – only those three get to have their actual birthdays acknowledged in the Church’s calendar.

Today’s celebration transports us in spirit into an Old Testament atmosphere of pious, devout senior citizens in sterile marriages, whose youth is symbolically restored by the great gift of fertility. In the world of the Bible, few fats could be worse than not having any children. Quite unlike the myself and my generation only mentality so emblematic of our own time, fertility and the future it made possible were seen as the greatest of gifts, a great grace, a true blessing. This blessing was now belatedly being granted to Zechariah and Elizabeth, but it was not granted to them simply for their own satisfaction. Hence, the Gospel story recounts a whole series of special events surrounding, first, the conception, and, then, the birth, circumcision, and naming of their son. These circumstances served Zechariah and Elizabeth and their family and friends as visible signs, so to speak, of their son’s special status and mission, indicating the purpose of this miraculous event in God’s great plan for the whole human race.

Zechariah and Elizabeth’s family and friends, when they heard that the Lord had shown his great mercy toward them, naturally rejoiced with them. At first, however, they still had their own pre-conceived understanding of what they were celebrating, as reflected in what they thought the newborn’s name should be. But they – and, through them, we – must be made to see that this miracle entailed much more than the Lord’s mercy to one couple, to one family, Hence, the physical miracle of John’s birth was augmented by even further signs dramatically highlighting his fuller significance.

In the world of the Bible, naming someone was an act of authority. In the case of a newborn, it signified the father’s recognition of his child. But, as the angel had foretold to Zechariah, many would rejoice at this boy’s birth. He would belong not just to his parents but to the special mission God had made him for. Hence, his name would have to be special – a name chosen by God himself and announced by an angel. Because Zechariah and Elizabeth’s friends and family were people of faith, they recognized in this a sign that God really was still present and active in the world. So, unable to keep the good news to themselves, they immediately anticipated John’s own special mission by spreading the word throughout the hill country of Judea.

Today’s feast focuses on the birth of John the Baptist. The familiar details of his preaching and baptizing we will hear about again, as we do every year, in Advent. That career was actually quite brief – cut short by his arrest and eventual execution. John’s martyrdom is recalled in the Church’s calendar in August, but it seems appropriate today, during this current two-week “Fortnight for Freedom,”  to recall both the fact and the circumstances of John’s imprisonment and execution by King Herod Antipas. Luke’s Gospel suggests that King Herod himself had actually admired John. It says Herod liked to listen to him, but also that he was very much perplexed (Mark 6:20). The source of Herod’s perplexity seems to have been the challenging part of John’s preaching,  - for John had defiantly challenged Herod regarding the king’s marriage to his brother’s wife – which violated Jewish religious law regarding marriage (Mark 6:18). Just as John had pointed ahead to Jesus in life, his death also pointed ahead to Jesus’ own death at the hands of Roman political authority – and beyond that to the many martyrs whose heroic witness to their faith and to the moral law would put them at odds with political power. Indeed, the liturgical calendar this week commemorates several important early martyrs: on June 30. the First Martyrs of Rome, executed in A.D. 64, in the persecution begun by the Emperor Nero; on June 28, St. Irenaeus, an outstanding bishop and theologian, martyred around the year 202; and on June 29, the great Apostles Peter and Paul.

John’s birth, which we celebrate with such solemnity today, continued the process that began with the promise God long ago made to Abraham, then renewed over and over to his descendants, and finally fulfilled in Jesus, whose own birth we will celebrate just six months from now. Jesus’ birth is celebrated in the week of the winter solstice, when the days are short, and the nights long and dark, when the ancient world celebrated the birth of the sun and the imminent prospect of increased light and longer days. But the birth of John is celebrated in the week of the summer solstice, when the days are long and the sun is bright, but after which the days will quickly start to get shorter. Today heralds the hope that the dry desert summer will soon yield to the autumn rains and the life-giving wetness of winter – nature’s way, perhaps, of symbolizing the effect in every spiritually dry and sterile soul of the coming of Christ whose mission it was first John’s – and is now ours – to announce to the world.