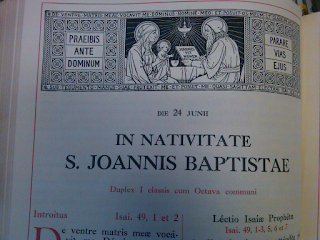 The day of a saint's death is when we usually celebrate his or her memory, but the Church’s liturgical calendar also commemorates three actual earthly birthdays – those of Jesus himself (Christmas, December 25), the Blessed Virgin Mary (September 8), and this weekend’s solemnity of the Nativity of Saint John the Baptist. One of the oldest festivals of the Christian calendar, the Nativity of John the Baptist on June 24 comes (according to the ancient Roman method of computing dates) exactly three months after the celebration of the Annunciation on March 25 and six months before Christmas thus following the sequence of the Gospel narrative.

At the Annunciation, the Archangel Gabriel informed the Virgin Mary that her relative Elizabeth was miraculously already six months pregnant (Luke 1:36). Mary then journeyed to visit Elizabeth - the event known as the Visitation and celebrated in the calendar on May 31. At the Visitation, according to Luke’s Gospel, baby John “leapt” in Elizabeth’s womb at the sound of Mary’s greeting (Luke 1:44), thus already beginning his prophetic mission of preparing the way for the coming of Christ.

Just as the celebration of Christmas corresponds to the winter solstice, after which the days begin to get longer again, the celebration of the birth of John the Baptist corresponds to the summer solstice, after which the days soon begin to get noticeably shorter. Many of the traditional “Midsummer Eve” customs in European folklore (bonfires, etc.) concerning this date derive from the connection between the feast and the solstice. In Church tradition, the fact of this feast falling around the time of the solstice also came to be seen as symbolic, in the context of John the Baptist words with regard to Jesus: He must increase, but I must decrease (John 3:30).

The special Preface used in the Mass highlights the entire mission of John the Baptist, concluding with his “supreme witness by the shedding of his blood.” This refers to the martyrdom of John the Baptist at the hands of King Herod Antipas (Mark 6:17-29). Although today’s feast focuses on John the Baptist’s birth, and his martyrdom is recalled on its own separate day (August 29), it seems very appropriate at this time to recall both the fact of John’s death and the circumstances surrounding it. According to the New Testament account in Mark’s Gospel (Mark 6:17-29), it appears Herod had actually admired John. Mark’s Gospel says Herod liked to listen to him, but also that he was very much perplexed (Mark 6:20). The source of Herod’s perplexity seems to have been the challenging part of John’s preaching, for John had challenged Herod regarding his marriage to his brother’s wife in defiance of Jewish religious law regarding marriage (Mark 6:18).