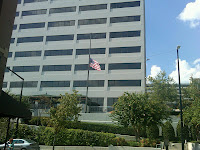 One of the multitude of greater and lesser differences I experience living where I do now, as opposed to where I used to live, is that September 11 now comes and goes with much less salience and immediacy. I did celebrate the Votive Mass "In Time of War" today, but otherwise have done little else to mark the occasion (besides take a picture of the flag at half-staff in front of the Tennessee Valley Authority Tower).

With the passage of time, of course, that may be increasingly true everywhere. Thus, Dana Milbank wrote in this morning's Washington Post (“On 9/11, Washington as Usual”):
"Nine-eleven just isn’t what it used to be. Residents of the capital will awaken to what is forecast to be another clear Tuesday morning, just like that one 11 years ago, and they will find that the day that changed the nation is becoming more and more ordinary.
"In some ways, this is a good thing: Osama bin Laden is dead, al-Qaeda isn’t as scary, and Sept. 11, 2001, is on its way to joining Dec. 7, 1941 — more historical, less raw. Yet it’s also unsettling that the day is losing its power to make Americans pause. This is part of the general amnesia that led Mitt Romney to deliver his acceptance speech for the Republican presidential nomination without mentioning a country called Afghanistan."

Having myself lived through that infamous day in New York City exactly 11 years ago today, its annual recurrence elicits a combination of responses. There is, first of all,  the memory of those who were lost - in particular for me, two St. Paul's parishioners. Remembering those who have died is a duty incument upon the living - always and everywhere.  Then there is the memory of the event - the "rawness" of it, to use Milbank's image - the transformation of a beautiful blue September sky into a darkened, frightening one, the days of anxiety followed by weeks of funerals.Finally, there is the attack's long-term impact on our country and the world.

Memorializing, especially when focused on remembering vicitms more than the event itself and its larger public significance, necessarily has its limits; and nothing highlights those limits more than the inevitable passage of time. We can - and to some extent we must - "move on" even while not forgetting. We may mourn forever, but we mourn differently now than then. That's the way life is.

As for the significance of the event, the question then becomes whether it still retains the same significance for us today. Pearl Harbor, after all, had a very specific significance for Americans for the duration of Wold War II. With that war won, its significance necessarily changed, becoming more a matter of historical memory and possible lessons  to be learned.

But what lessons? To me, one lesson is certainly how we can never adequately anticipate what we don't expect. In restrospect, it's easy to say that America should have expected a Japanese attack in 1841 and a terrrorist attack in 2001.But it's hard to read the signs the same way before the fact. Until something like that actually happens it's hard to imagine - let alone anticipate or plan for - what is still unimaginable. That is why in each of those instances so much of the after-the-fact blame-game misses the point. Once such an event has happened, one may draw all sorts of lessons for future preparedness. But it probably makes little sense - and gets in the way of present and future preparedness - to waste energy looking backward.

The most important legacy of 9/11 remains the two wars which we have fought since then and the changed way we now look at our dangerous world. Here, however, we have experienced a weird disconnect. The four wars which the U.S. fought in the 20th century were all fought with conscript armies, and thus broadly impacted the entire society. Not so our post 9/11 wars. Defending one's country militarily used to be seen as an expectaiton of citizenship. (See, for example, Aristotle, Politics, III, vii). Now militrary service is just one possible career option, and our national wars are fought with minimal impact on those who have chosen to pursue other options. Even our national economic policies reflect this weird disconnect. As Matt Miller observed, also in this morning's Washington Post, "In a saner era, the big 2001 Bush tax cuts enacted a few months before September 11 would have been immediately revisited, because we were now a nation at war."  The fact that no such thing happened remains radically revealing about the kind of country and nation we have become, in spite of 9/11.