Jesus said, "I have observed Satan fall like lightening from the sky" [Luke 10:18]. 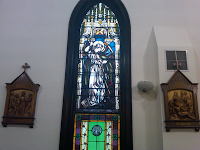 At the awesome age of nine, it fell to me to pick a confirmation name for myself. I chose Michael.I encoutnered some unexpected family opposition on the odd grounds that Michael was not an Italian name. Michael Corleone and The Godfather movie were still 15 years in the future, but  you'd think that surely somebody should have heard of Michelangelo Buonarotti. Well, I won that battle, and on September 22, 1957, Bishop Cornelius Van Lierde addressed me (in Latin, of course) as Michael as he signed me "with the sign of the cross" and confirmed me "with the chrism of salvation" (as the sacramental form then in use put it). And then we went home and had a turkey dinner, and I got presents.
Why Michael? For a wimpy, somewhat nerdy kid, Michael seemed to sound a suitably macho note. If I'd been British - or at least English - I might perhaps have picked George for the same reason. What sealed the deal for Michael for me was the prayer we used to recite regularly in those days after every Low Mass: Saint Michael the Archangel, defend us in battle. Be our protection against the wickedness and snares of the devil. May God rebuke him, we humbly pray; and do you, O Prince of the heavenly host, by the divine power of God, thrust into Hell Satan and all the other evil spirits, who prowl about the world, seeking the ruin and destruction of souls.
Just the sort of saint a wimpy kid would want to identify with in a a tough, bullying world! No wonder ancient Israel - a small kingdom at best, or even worse a collection of displaced persons, surrounded by powerful ancient empires, surrounded bu bullies on every side - sought Michael's protection: At that time there shall arise Michael, the great prince, guardian of your people. It shall be a time unsurpassed in distress since nations began until that time. At that time your people shall escape, everyone who is found written in the book [Daniel 12:1]. No wonder the Church in turn has seen Michael as the great warrior angel against Satan! Thus, the reading at this morning's Mass: Then war broke out in heaven; Michael and his angels battled against the dragon. The dragon and its angels fought back, but they did not prevail and there was no longer any place for them in heaven. The huge dragon, the ancient serpent, who is claled the Devil and Satan, who deceived the whole world, was thrown down to earth, and its angels were thrown down with it [Revelation 12:7-9].
Whether it's the historically insignificant personal struggle of a wimpy kind in the Bronx, or the historically decisive story of Israel, or the cosmic battle between the Kingdom of God and Satan, the struggle seems ongoing: But woe to you, earth and sea, for the devil has come down to you in great fury [Revelation 12:12]. But, at least in that ultimate conflict, whatever the costs and struggles along the way, the final outcome is clear: for he [the Devil] knows he has but a short time [ Revelation 12:12].
Angels are incorporeal spirits, but we portray them as men - Michael as a warrior defeating the dragon/serpent (as seen for example the attached phjoto of a window in my church). As we struggle to navigate our way through this perilous, problem-filled life, and as the Church struggles to hold its own against all the threating power of the world, we take comfort in the protection of the multitude of angelic spirits who share the universe with us and find courage in the confidence that the decisive battle has already been one on our behalf.
Posted by City Father