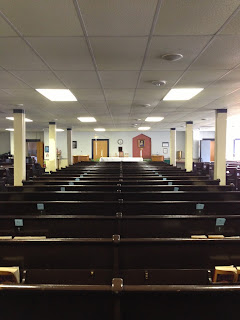 When St. Paul wanted to make his case to the Christian community in Galatia, he felt the need to introduce himself, to talk about his background, and to make the case for his authority in terms of how he came to be an apostle [Galatians 1:11-19]. The same was true with many of the Old Testament prophets – but not with the prophet Elijah. One of the most famous and important prophets in all of Israel’s history, Elijah just appeared on the scene so to speak, with not much introduction, to reprimand the wicked King Ahab. His arrival coincided with a severe drought, which led him to seek the hospitality of a certain poor widow. Then, after a year during which Elijah’s presence had been a blessing for the widow and her only son, suddenly the son got sick and died [1 Kings 17:17-24]. Not much repayment for her hospitality!


Nowadays it is divorce, which is more often the ticket to poverty for women and children. In the ancient world, being left a widow without a man to provide for her often led to poverty and destitution – as it often still did in our own society before Social Security and Medicare. So no wonder the widow was angry at Elijah and Elijah’s God! But, instead of reacting defensively when challenged by the widow’s grief and anger, Elijah seemed to take her side. He called out to the Lord, “will you afflict event he widow with whom I am staying by killing her son?” And the Lord heard his prayer, and Elijah was able to return the boy alive to his mother.


Elijah is remembered for many things. One of them is this story of his compassion for this widow. Jesus mentioned it in his hometown synagogue in one of the early episodes of his public life [Luke 4:26].Unlike the story of Elijah and the widow, we don’t know what in particular may have brought Jesus to a city called Nain [Luke 9:11b-17],where, lo and behold, he was greeted at the city gate by another grieving widow, mourning her only son (to borrow St. Augustine’s famous phrase, misery meeting up with mercy). Jesus had no prior connection with her, had not received her hospitality, didn’t owe her anything so to speak. But that didn’t block his compassion. It was that compassion, in fact, which created a connection. Moved with pity for her, he touched the coffin, and said, “Young man, I tell you arise!” The dead man sat up and began to speak, and Jesus gave him to his mother.


Both these events were revelations of God. In Elijah’s case, the widow declared: “The word of God comes truly from your mouth.” At Nain, the crowd exclaimed “A great prophet has arisen in our midst”and “God has visited his people.” These incredibly miraculous events identified Elijah and Jesus as true prophets, great prophets, who embodied God’s word, and revealed God’s power. But more than power, they revealed God’s presence. “God has visited his people”!


In those otherwise unimportant places, God visited his people – unimportant people, poor people, widows with no source of support, sons whose lives were being cut short way ahead of time. God didn’t just visit. He connected. Elijah and Jesus connected directly by touching the dead, which, of course, risked ritual impurity from contact with a dead body. Elijah and Jesus didn’t just speak God’s word, they acted it out, by touching, by becoming one with the dead, and thus bonding with all grieving and suffering people there and everywhere.


Both Elijah in anticipation and Jesus in fulfillment were revealing the kingdom of God – not just talking about it as an abstract theory, but making it happen in our lives by bonding with us. And, like the widow’s son, our only response to the surge of new life within us must be to get up and speak. Like the grieving widows and the people in the crowd, we too must recognize God’s word at work in our world, God visiting his people.


And not just visiting, but staying with us – in his Church! Our human lives are created by the power of God, but they are maintained and sustained by his incredible compassion. We are witnesses as well as beneficiaries of that compassion and are called upon to continue to express it and share it in our lives together as a Church, embodying God’s new kingdom in our world.
Homily for the 10th Sunday in Ordinary Time, Immaculate Conception Church, Knoxville, TN, June 9, 2013.
Posted by City Father