According to tradition, the city of Rome was founded on April 21, 753 BC, by twin brothers, Romulus and Remus, whose father was Mars, the god of war. But the two argued about which hill to build on; and, when Romulus began building his city wall, Remus ridiculed his work by jumping over the wall. Romulus responded by killing him - thus determining which one Rome would be named after! In time, Rome would become the greatest city in the world, the capital of the greatest empire the world had ever yet known.

To that same city, some 8 centuries later, came two men, Peter and Paul, brothers not by blood, but by their common faith in Jesus Christ, who had called them to be apostles. The Christian community they found in Rome was small, socially and politically insignificant - an easy target when the Emperor needed scapegoats to blame for a destructive fire. Among those martyred in that 1st Roman persecution of the Church were the apostles Peter and Paul.

One story recounts how Peter started to flee but returned to Rome and embraced his martyrdom after meeting Jesus on the road. “Lord, where are you going,” Peter asked. “I am going to Rome to be crucified again,” Jesus responded.

If the Christians of Rome required encouragement and confidence to persevere in their new faith, what more powerful reinforcement could they have had than the witness offered by the martyrdom of those two illustrious apostles, who were the Church’s link back to the Risen Lord himself!  - Peter, crucified on the Vatican Hill, and Paul, beheaded on the Ostian Way. 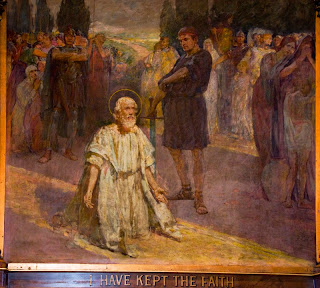 At the west end of the south aisle, over the simple but impressive altar dedicated to St. Paul, is Robert Reid’s evocative painting depicting St. Paul kneeling calmly and confidently awaiting his imminent martyrdom. Above and below the picture are the famous words we just heard from St. Paul’s 2nd Letter to Timothy: “I have fought a good fight, I have finished my course. I have kept the faith!” [2 Timothy 4:7]

Inspired by Saint Paul’s evangelical energy and apostolic zeal, on July 7, 1858, Father Isaac Hecker and three other priests founded  the “Society of Missionary Priests of St. Paul the Apostle,” known ever since as “The Paulist Fathers.” Three days later, the Archbishop of New York assigned them the care of a new parish on Manhattan’s west side – placed, like the Paulists themselves, under the patronage of St. Paul the Apostle. For over 150 years, the Paulist Fathers have ministered here in this parish, the life and mission of both Paulists and parish intimately tied together. And for most of these years the spiritual center of both Paulists and parish has been this big beautiful church, opened in 1885.

Nowadays, worshippers entering through the main door of this great church, leave the modern secular city and its empire behind by passing under a monumental modern portrayal of what we commonly call Paul’s conversion. That great event transformed Paul from an enemy into a disciple of Jesus and an apostle on equal footing with the others to whom the Risen Lord had earlier appeared. From then on Paul would exemplify – as all of us who pass through that door are being challenged to exemplify - what it means to be truly converted to Christ, his witness in the world, an apostle sent to make disciples of all without exception. That mission is also the theme of the beautiful early 20th-century floor mosaic at the church’s entrance, recalling Paul’s preaching outreach to pagan society and culture in 1st-century Athens.

Isaac Hecker wanted the architecture of this church to focus attention on the high altar – as indeed everything in the life and mission of the Church must be focused on leading us and the world we live in to Christ.

Above the high altar within Stanford White’ golden dome is a verse from the Divine Office for the feast of Saint Paul’s Conversion: “You are a vessel of election, holy apostle Paul,” the response to which, “Preacher of Truth in the whole world,” is in turn inscribed in another mosaic on the church floor at the foot of the sanctuary steps.

Communicants coming to the altar rail used to see that mosaic, designed to highlight the symbols of Saint Paul’s apostleship – the book open to Saint Paul’s words, To me, the very least of all the holy ones, this grace was given, to preach to the Gentiles the inscrutable riches of Christ [Ephesians 3:8] and the sword, the symbol of Paul’s martyrdom.

Which brings us back to where we started. The old Rome of Romulus – proud, powerful, pagan Rome, based on the murder of one brother by another – was, for all its accomplishments and authentic grandeur, a human state like any other, a warring conqueror conquered in turn by other warring conquerors. The new Christian Rome of Peter and Paul conquered that old Rome, but in a new way. Proud, powerful, pagan Rome, founded on the murder of one brother by another, was in turn conquered by the faith that empowered Peter and Paul as brothers-in-Christ to evangelize an empire and die together as witnesses to a new way of life.

As we celebrate this great feast recalling the mission and martyrdom of the Apostles Peter and Paul, here in this Paulist “Mother Church,” let us in turn – as Saint Augustine once recommended on this feast – “embrace what they believed, their life, their labors, their sufferings, their preaching, and their confession of faith” [Sermon 295, 8].

Homily for the Solemnity of Saints Peter and Paul, Church of Saint Paul the Apostle, New York, June 30, 2013.