The Titanic in Tennessee 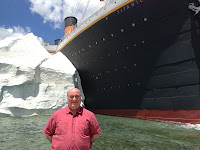 My friend and fellow Paulist Ivan Tou (presently a pastor in Minneapolis, Minnesota) is in Knoxville this week. So yesterday the two of us  went to the Titanic Museum in Pigeon Forge.  Now what's East Tennessee doing with a Titanic Museum? Good question! This isn't exactly Belfast or Southampton or Cherbourg or Queenstown or New York or Newfoundland - all places with some tangible connection with the Titanic itself, either with its construction or its tragic voyage. And the Titanic clearly wasn't cruising too fast on the Tennessee River that calm, moonless night when it hit an iceberg. Yet here she is! (Or at least a facsimile of half of her!)
For all sorts of reasons, the Titanic's sinking became a quasi-universal tragedy. So perhaps it's presence in Pigeon Forge is not so odd, after all, speaking as it does to the universal interest and emotional responses that the Titanic evokes over a century after her sinking. And in fact it really is a great museum - filled with lots of information about the experience of being on that ill-fated ship and stories about the actual people who had that experience, only one-third of whom survived it.
The exhibit includes photos taken by the Irish Jesuit Fr. Brown, who sailed on the Titanic from Southampton to Queenstown and took a series of pictures - the only photos we have that were ever taken during the actual voyage (photos found years later in the Jesuit house in Dublin). This summer, the museum also features for the first time in the United States the actual violin that was used by Wallace Hartley on the deck that night. The violin had originally been given him by his fiance, and it is the violin on which Hartley famously played the hymn Nearer My God To Thee, the last music ever heard on the Titanic.
When you enter the museum, you get a "Boarding Pass," with the name and some biographical information about a passenger. I got James Hyland, a 19-year of member of the crew (one of 431 in the crew), whose pencil sketch of the ship is included among the exhibits.  At the end, you pass through the Memorial Room, where you can look up the name and learn his or her fate. My guy survived - and died at age 81!
The Titanic's tragic end occurred on Low Sunday night. The following Sunday, April 21, 1912, the Swiss theologian Karl Barth (1886-1968) preached about the Titanic: "I believe that, just as we may not approach events such as this one out of curiosity and a thirst for sensation, nor may we disregard them in silence and indifference, however much daily newspaper reports might cause us to do so. Rather they should speak to us. For through them God addresses us with a power and urgency that we only rarely perceive concerning the greatness and nothingness of human beings who are so like God, and yet so unlike him, concerning the wrath and the mercy of the eternal God who reigns in us and over our destinies, sometimes close at hand and tangibly, but sometimes infinitely far away and mysteriously. (Tr. Christopher Asprey, in The Word in this World: Two Sermons by Karl Barth, ed. Karl I. Johnson, 2007)
Posted by City Father