At present, two European states - the UK and Denmark - have reigning queens . The Netherlands has a just recently retired one. Along with the Netherlands, Norway, Sweden, and Spain each have a king, each of whom is married and whose wife is, therefore, a queen. Belgium also has a queen dowager and a queen mother. So that's nine queens of one sort or other in contemporary Europe. But today the Church honors the longest-reigning Queen of all.
Today's feast of the Queenship of the Blessed Virgin Mary is a very modern addition to the calendar, having been created by Pope Pius XII only as recently as 1954. But the concept of Mary's queenship and devotion to her as queen are quite ancient and deeply rooted in both the Eastern and Western Churches. In the West, the Coronation of Mary is the final event in that familiar series of special events in salvation history one meditates on when praying the rosary. Traditionally there have been 15 such "mysteries of the rosary" - 5 joyful, 5 sorrowful, and 5 glorious - as formalized in 1569 by the Dominican Pope Saint Pius V in the Bull Consueverunt Romani Pontifices.
Meditating on this final "mystery" of Mary's coronation as queen, Blessed Pope John XXIII wrote in 1961: "The meaning of the whole rosary is summed up in this scene of joy and glory, with which it ends." 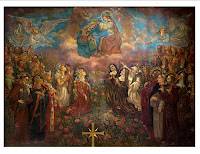 That sense of  "joy and glory" is beautifully conveyed in a painting by 19th-century American artist William Laurel Harris above May's altar at the Paulist Mother Church in New York. It portrays Christ the King crowning his Mother, flanked by God the Father and the Holy Spirit. Watching are a host of angels and saints. If we think in temporal terms, If we imagine Mary's "coronation" as a temporal event following upon her assumption, then obviously most of those saints would not have been there to see it. But that is evidently not how we are to imagine Mary's "coronation." Even in the case of an earthly monarch, after all, a "coronation" is more than just some one-time event but is intended rather to establish and symbolize an ongoing relationship between the monarch and his or her people. That is what the imagery of Mary's "coronation" is meant to signify for us, who are intended to include ourselves among the throng of angels and saints in that picture experiencing Mary's queenly power here and now and thus anticipating the "joy and glory" we hope eventually to be fully a part of.

Mary's queenly status is derivative from her role as Mother of God, the principal title to which all her other titles are related. Most of us probably addressed her as Mother and Virgin before ever addressing her as Queen. For most of human history, motherhood and virginity were powerful statuses and were socially valued as such. Sadly, however, that may be less so today. Queenship, on the other hand, still has powerfully evocative resonances. Perhaps the heightened modern emphasis on this Marian title may be a providential vehicle for religion today, vividly keeping before the Church the image of final fulfillment in "joy and glory."