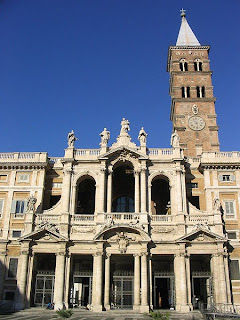 A few years ago, as I was trying to get my Italian up to speed for my course at the Congregation of the Causes of Saints in Rome, I discovered a veritable treasury of old Italian newsreels on YouTube – everything from King Victor Emmanuel III opening the Italian Parliament in the 1930s to Pope Pius XII’s visit to the famous Dominican church of Santa Maria Sopra Minerva in April 1940 as part of his (unsuccessful) strategy to keep Italy neutral in World War II. Among the many videos I found were several from the 1950 Holy Year – including the events surrounding Pope Pius XII’s solemn definition of the dogma of the Assumption of the Blessed Virgin Mary on November 1, 1950. One video shows how on the previous evening, for the first time in almost a century, the famous image of Maria Salus Populi Romani ("Mary, Safety of the Roman People") was carried in solemn procession from downtown Rome to St. Peter’s, where it remained overnight at the papal altar over St. Peter’s Tomb.
That famous image is ordinarily housed in the Borghese Chapel in the Papal Basilica of Saint Mary Major. It was there that the future founder of the Paulists, Isaac Hecker, went to pray before that image after his expulsion from the Redemptorists in August 1857, and it was there that Pope Francis went to venerate that same image on the day after his election as pope last March.  Today the Church commemorates the Dedication of that Basilica by Pope Sixtus III (432-440). Built to commemorate the Council of Ephesus (431) which affirmed the Blessed Virgin Mary’s title as “Mother of God,” the Basilica of St. Mary Major is one of Rome's four principal papal basilicas (along with Saint John Lateran, Saint Peter’s, and Saint Paul’s Outside the Walls).

The smallest of the four, Saint Mary Major is a classical basilica with a wide nave, two side aisles, and a semicircular apse at one end of the nave (the basic model Isaac Hecker was attracted to in planning his design for the Paulist Mother Church in New York). Its 14th-century bell tower is Rome’s highest. Its 16th-century ceiling is gilded with gold, supposedly brought back from Spain’s newly conquered American empire. Under the papal altar is a crystal reliquary which supposedly contains wood from the original crib of Jesus in Bethlehem. Back in the glory days of the Roman “stational churches,” this was the site of the Pope’s Christmas Eve Midnight Stational Mass (as well as many other major occasions during in the Church's calendar). The future founder of the Jesuits, Saint Ignatius Loyola celebrated his first Mass in that crypt on Christmas Day in 1538.


That annual recurrence of this day deserves more attention that it may otherwise get, for Saint Mary major is the "mother church" of all churches - great basilicas, monumental cathedrals, ordinary parish churches, little shrine chapels - that are named for the Mother of God under whatever title. That includes, of course, my own church of the Immaculate Conception here in Knoxville. According to The Catholic Church in Tennessee: The Sesquicentennial Story, by Thomas Stritch (Nashville: The Catholic Center, 1987):
“The declaration of the doctrine of the Immaculate Conception took place in 1854. This assertion by the Church of Mary’s unique sinlessness electrified the Catholic world, especially the United States, which placed itself under the special patronage of the Mother of God under that title. So there was no question of what the new church in Knoxville was to be called…”
After more than a century and a half, the "Church on Summit Hill" still stands, smaller than Saint Mary Major to be sure, but a comparably eloquent witness to Mary's motherly patronage of God's People.