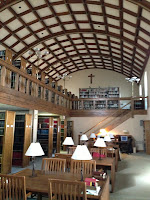 In Washington, DC, for a meeting, a Final profession, and a Diaconate ordination, I spent this afternoon in one of my favorite places - the library at St. Paul's College. In my day, the room that is now the library was the seminary chapel. In fact, my class was the last class ever to make its Final Profession in that chapel on January 25, 1986. (That the current library was the seminary chapel from 1956 to 1986 is now only evident from the still surviving stained glass windows.) At that time, the seminary library was housed in the building's oldest wing - part of it in what had actually been the original chapel from 1913 to 1956 and then after 1986 reverted to being the chapel once again - retaining the original windows (but little else of its original beauty).

But it is not the architecture or the windows that make me want to pass an afternoon in the library. It's the books. Where else can I spend an hour or more with old favorites like Pierre Batiffol's 1912 History of the Roman Breviary or Archidale King's 1957 Liturgies of the Primatial Sees? Where else can I catch up on recent issues of Theological Studies or Journal of Church and State? Not being attached to an academic institution or a religious community's House of Studies, one misses the easy access to books and periodicals a good old-fashioned library provides.

Of course, one can still personally subscribe (as I do) to some periodicals - The New York Review of Books, The London Review of Books, The Economist, Worship - with the added access the Internet now provides to all sorts of sources. And, of course, Amazon offers easy access to new books - often at a really reasonable price, especially if I settle for reading them on my KindleFire! That's all to the good, and I appreciate how today's technology makes available what was once accessible almost exclusively in libraries. But I still savor the timeless treasure of a traditional library.

What is the future of such treasures? Are they fated to extinction or minimal survival as museums from a distant past - like so many real-world Downton Abbeys? Does it make a difference? Is a world which cherishes libraries - cherishes the actual books that are housed in them - a better one than the emerging alternative? The contrary can certainly be asserted, I suppose. But I have no doubt it is a loss that libraries are among the disappearing treasures of a world we are rapidly leaving behind.
Posted by City Father