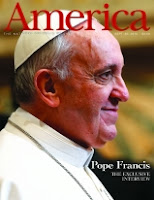 Published today in Jesuit publications around the world is an unprecedented 10,000-word interview Pope Francis gave to his fellow Jesuit Fr. Antonio Spadaro, editor of the authoritative Roman Jesuit journal  Civiltà Cattolica. The Pope himself approved the original Italian text before its translation into other languages. In the U.S, it is available in English in the Jesuit journal America. It can be accessed online at http://americamagazine.org/pope-interview.

In this wide-ranging yet highly personal interview, the Pope addresses a full spectrum of issues - his Jesuit vocation and his prior experience as a Jesuit superior, Jesuit spirituality ("thinking with the Church," Ignatian mysticism, "Finding God in All Things,"), the Church's mission to heal wounds and what that implies for a problematic over-emphasis on certain hot-button issues, and his reflections on religious life and the vows, on the Roman Curia, on women in the Church, on the Second Vatican Council, on certitude, on hope, on literature and the arts, on the development of doctrine, and on prayer.

We get some insights into the Pope's personal life and cultural tastes. We learn, for example, that he reads his Breviary in Latin and particularly prefers his evening time of Eucharistic adoration. And we find out some of his favorite books, movies, and music. He likes Dostoevsky and Holderlin. (I haven't thought of Holderlin since I wrote a paper about his poetry in German class more than 40 yars ago!) He likes Manzoni and Hopkins, admires Caravaggio and Chagall. He loves Mozart, Beethoven, Bach, and Wagner. For films, he mentions Fellin's La Strada and Rosselini's Roma, Citta Aperta.

This was an interview with a Jesuit for publication in Jesuit journals. So it is hardly surprising that he devotes so much time to his Jesuit vocation and to religious life more generally. I think this confirms that one of the distinguishing features of this pontificate is that this Pope is personally and spiritually very rooted in religious life. He speaks frankly and openly about mistakes he feels he made in governance as a young superior, about the meaning of the vows, and about the importance of community. "I cannot live without people. I need to live my life with others." (This, apparently, accounts for his preference for living at Santa Marta rather than the official papal apartment, which - contrary to the interpretations of some - he acknowledges is not excessively luxurious.) He emphasizes that the Jesuits "must be contemplatives in action, must live a profound closeness to the whole church as both 'the people of God' and 'holy mother the hierarchical church'."

The Pope has a lot to say. Still, we can be quite confident that the media take on his comments will almost certainly emphasize his comments on the issues the media most cares about. Indeed, while his reflections on religious life  give great insights into who he is, they will be of greatest interest to others in religious life and to those who generally pay particularly close attention to such matters - the Church equivalent of being "inside the Beltway." For the rest, the proverbial people in the pews, undoubtedly the most attention-grabbing words will be these:

That this is more than a purely pragmatic tactical concern on his part is clear from the following paragraph:

"The dogmatic and moral teachings of the church are not all equivalent. The church's pastoral ministry cannot be obsessed with the transmission of a disjointed multitude of doctrines to be imposed insistently. Proclamation in a missionary style focuses on the essentials, on the necessary things: this is also what fascinates and attracts more, what makes the heart burn, as it did for the disciples at Emmaus. We have to find a new balance; otherwise even the moral edifice of the church is likely to fall like a house of cards, losing the freshness and fragrance of the Gospel. The proposal of the Gospel must be more simple, profound, radiant. It is from this proposition that the moral consequences then flow."

What we are witnessing here is the working out on various levels of the Pope's repeated emphasis since his election on mercy. His episcopal motto, as he reminds us early on in the interview is Miserando atque Eligendo ("By Having Mercy and by Choosing Him"). In this context, I found it interesting and encouraging that the attention-grabbing comments quoted above come in a section of the interview sub-titled "The Church as Field Hospital." It is a very intriguing and very apt image. in the Pope's words, "the thing the church needs most today is the ability to heal wounds and to warm the hearts of the faithful; it needs nearness, proximity. I see the church as a field hospital after battle. ... The church sometimes has locked itself up in small things, in small minded rules. the most important thing is the first proclamation: Jesus Christ has saved you. And the ministers of the church must be ministers of mercy above all. ... In pastoral ministry we must accompany people, and we must heal their wounds."

The Pope's words will be much studied and analyzed. For now, they speak simply in a heartfelt fashion. And the right response is Amen!