At the Eucharistic Congress 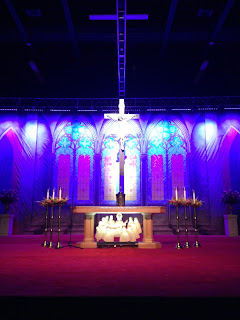 The Diocese of Knoxville celebrated the 25th anniversary of its founding this past Friday and Saturday with a Eucharistic Congress - the first ever in East Tennessee. As the Bishop of Knoxville, Bishop Richard Stika had said, what a blessing it was as Catholics came together at our Diocesan Eucharistic Congress last week – “to celebrate the greatest gift of our Church, the Holy Eucharist, shoulder-to-shoulder with thousands of Catholics from throughout our diocese, the United States, Canada and Latin America to rejoice in his presence with such ‘unique intensity’.”


Unique it was! And intense it was! From the start on Friday afternoon, as thousands converged on the Sevierville Convention Center, the excitement and enthusiasm were evident. After hearing confessions for an hour, it was time for me to concelebrate at the All Schools/Youth Mass. As Dean of the Smoky Mountain Deanery, I was up on the “stage” with the Bishops and the other principal concelebrants, and so I got a good view of the congregation gathered for the Mass and could appreciate the joy and hope that seemed to emanate from the altar to the whole complex.
The principal day of the Congress, Saturday (the feast of the Exaltation of the Holy Cross), began with thousands more gathered together for a multi-media Morning Prayer that celebrated in turn the created beauty of East Tennessee, the churches and institutions of the diocese, and the faithful themselves. There followed a busy day of crowded presentations and other activities. Long lines formed in the main corridor for confessions, manifestly one of the principal blessings of the Congress. In addition to hearing confessions, I took a couple of turns standing at the Vocation Table, ready to answer questions about religious life and to distribute literature about the Paulist Fathers and other communities serving in the Diocese of Knoxville.
Saturday afternoon’s events also included a service of Eucharistic Adoration in the main hall, led by His Eminence Justin Cardinal Rigali. (It was during that event that the only notable mishap of the day occurred, when someone accidentally set off a fire alarm!) Then the Archbishop of New York and President of the United States Conference of Catholic Bishops, His Eminence Timothy Cardinal Dolan, delivered the Congress’s Keynote Address on the Eucharist as Sacrifice, Mea., and Real presence. As anticipated, His Eminence's presentation was entertaining and humorous while simultaneously serious and inspirational. The afternoon and the Congress itself concluded with a Solemn Pontifical Mass celebrated by our own Bishop with several other archbishops and bishops, an abbot, and most of the priests of the diocese concelebrating. Again from my place up close to the altar, I could see the entire congregation filling the packed meeting hall. It really was a uniquely intense experience of strong and living faith and a diverse but united Catholic community – alive and well and building God’s Kingdom here in East Tennessee.
Posted by City Father