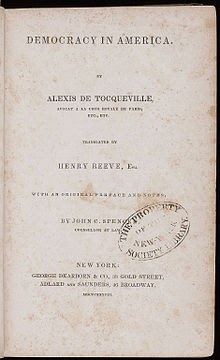 In 1835, at the conclusion of Volume One of his classic study of American society, Democracy in America, Alexis de Tocqueville (1805-1859) famously observed Providence seemed to have destined two growing nations to determine between them the world’s future. The two nations were, of course, the United States and Russia – the former emphasizing individual freedom, the latter servitude and autocracy. The cogency and relevance of de Tocqueville’s analysis of American democracy can stand on their own merits and do not depend on his prophetic foresight. Still his prediction that the U.S. and Russia would become the dominant powers of the world and would be caught up in a competition rooted in the fundamental difference between their respective basic values has always added an extra something to de Tocqueville’s stature – especially for those generations of students (mine among them) that first studied de Tocqueville against the background of the Cold War.
In the current re-make of cold war crisis in the escalating tensions between Russia and the West over Ukraine and Crimea, de Tocqueville's prophecy seems again especially prescient and timely. In the aftermath of World War II, there really were only two serious powers left on the international stage - the United States and the Soviet Union, both of which had teemed together to defeat Germany and then divided the post-war world into their separate spheres of influence. Thanks to the deterrent effect of nuclear weapons, the Cold War never escalated into the catastrophically destructive 3rd World War that would almost certainly have happened in the absence of nuclear weapons. Yet, while nuclear weapons created an artificial parity between the U.S. and the Soviet Union that prevented actual warfare, the era we call the Cold War was punctuated by constant crises that gave that era distinctive anxiety. The coverage of the current Crimean crisis at time seems to replicate some of those older crises in Berlin and elsewhere.

While the Crimean crisis is real enough and poses really important policy challenges, comparing it to the Cold War reminds me of Karl Marx's often-cited, famous observation in The Eighteenth Brumaire of Lous Napoleon (1852) that history repeats itself, first as tragedy, then as farce. (What Marx actually said was "Hegel remarks somewhere that all great world-historic facts and personages appear, so to speak, twice. He forgot to add: the first time as tragedy, the second time as farce.")

Obviously, whatever the outcome of the current crisis, neither party plans to escalate to all-out war. Rhetorical flourishes aside, the Cold War was a classic exercise in Balance-of-Power politics, in which the U.S. and its allies worked together to contain Soviet aggressive designs within limits acceptable to both sides. The mention of Marx, moreover, reminds us that the Cold War was throughout its history further enflamed by a real ideological conflict between the American values of freedom, liberty, and constitutional government and the Soviet system of servitude and autocracy, cloaked in a Marxist revolutionary ideology of class conflict. De Tocqueville's prophecy, however, pre-dated Marxism and long pre-dated the Russian Revolution and the establishment of the Soviet system. De Tocqueville was responding to the challenge posed by Russia's long history of absolutism, then suddenly being propelled to the center of European politics in the post Napoleonic period. It reminds us that, while the particular formulation of the  ideological dimension of the Cold War as a conflict between democracy and communism, is now obsolete, the fundamental ideological difference between the two types of societies remains real and relevant.

As was the case in the original Cold War, other, non-Western societies will be continually comparing and measuring the contrasting values of American and Russian societies. Superior power always carries a lot of weight in these ostensibly ideological conflicts. In the aftermath of the collapse of the Soviet Union, communism, socialism, and everything associated with them seemed largely discredited, facilitating a world-wide embrace (however superficial) of Western democratic and constitutional language. As Russia reasserts her historic status and associates her new power with an alternative value system to the Western one - cloaked not in Marxist language now but in more traditional cultural and moral language (sanctified perhaps like the Tsars of old by the trappings of Russian Orthodoxy) - American cultural hegemony may again be challenged around the world by alternative value systems. This challenge will apply both to the traditional American ideology of  freedom, liberty, and constitutionalism and to its newer, post-modern version.