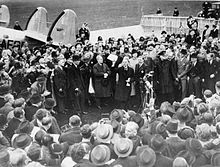 The current crisis in the Crimea has rekindled memories of the 1938 Sudetenland crisis and evoked the ghosts of Adolph Hitler and Neville Chamberlain and the Munich Pact. Both Munich and the consequent costs of appeasement were very much invoked in the years of the Cold War. In particular, Munich was was often invoked in support of standing firm, for example, in Vietnam - leading some of the war's opponents to warn against being bewitched by historical analogy.

And it certainly is the case that the Munich analogy has been used excessively. If international accords are routinely dismissed by their opponents as "appeasement," then it will be harder and harder to evaluate them objectively.

"How horrible, fantastic, incredible it is that we should be digging trenches and trying on gas-masks here because of a quarrel in a far away country between people of whom we know nothing. It seems still more impossible that a quarrel which has already been settled in principle should be the subject of war." So spoke British Prime Minister Neville Chamberlain in his September 27, 1938, broadcast on the Sudetenland crisis.

In the short-term, surely, Chamberlain was right. And, anyway, one might ask, why shouldn't the Sudetenland have become part of Germany? It was part of Czechoslovakia only accidentally, thanks to the disastrous dismemberment of the Hapsburg Empire in 1918 and the subsequent (also disastrous - and unjust) Treaty of Versailles. The post-World War I settlement had created new countries with new borders that left all sorts of people as minorities in countries they would not have chosen. Thus the Sudeten Germans, who had lived there for centuries, suddenly found themselves a minority in a newly created, non-German Czechoslovakia. That they desired union with their fellow German-speakers was perfectly natural. Nor was there anything particularly natural about the Czech border and their inclusion within it. Why should Britain or France endanger the peace of Europe to prevent the Sudeten Germans from achieving their own national self-determination?

Looked at that way, in the short-term, Chamberlain's argument seemed to make perfect sense. But when one shifts to the longer-term, then one's perspective changes. When one interprets what was happening not just as a rectification of the injustices of the post-World War I borders, but as part of Hitler's long-term plan to dominate Europe, then the calculus changes rather significantly. In 1938, only a minority (among them, notably, Winston Churchill) were thinking long-term. Almost everyone else was thinking - and wanted to think - in short-term categories. Hence the delirium of joy throughout Western Europe when the Munich Pact was finally signed, delivering the Sudetenland to Hitler and thus avoiding a European war. Hence, Chamberlain - later to be  excoriated for appeasement - was welcomed home from Munich as a hero for peace (photo).

But then Hitler's ambitions did not stop and his larger aims could not longer be denied. Britain and France recognized this, and one year later they went to war with Germany over Poland. The difference between the two situations was their switch from a short-term calculus focused on the ostensible merits of the particular territorial dispute to a long-term calculus focused on the fundamental threat Hitler posed to the peace and stability of europe.

If one looks at the contemporary crisis in the Crimea only in terms of short-term components, then again one might ask why the West should care. Crimea had been part of Russia for centuries. Given a choice, its population probably would prefer to be Russian rather than something else. Why shouldn't they be part of the country they really identify with? And why shouldn't Russia regain its historic dignity and status?

But suppose President Putin really wants more, really wants to reassert Russian power (at least indirectly) over the rest of the former Russian Empire and Soviet Union - e.g., not just Ukraine but the Baltic states and perhaps even Poland? Then the crisis takes on a different long-term significance.

As in 1938, no one now can know for sure. It was plausible to believe in September 1938 that appeasement might work. The lesson of history is that it didn't. But history is not automatic and doesn't automatically repeat itself. So we cannot know for certain which of Munich's lessons should be applied to this case. We cannot know in advance whether a Churchillian interpretation of Putin's actions is correct. But what we do know is that, if the Churchillian interpretation of Putin's long-term aggressive intentions turns out to be correct, then the consequences of not having responded accordingly now, will be that much worse later.