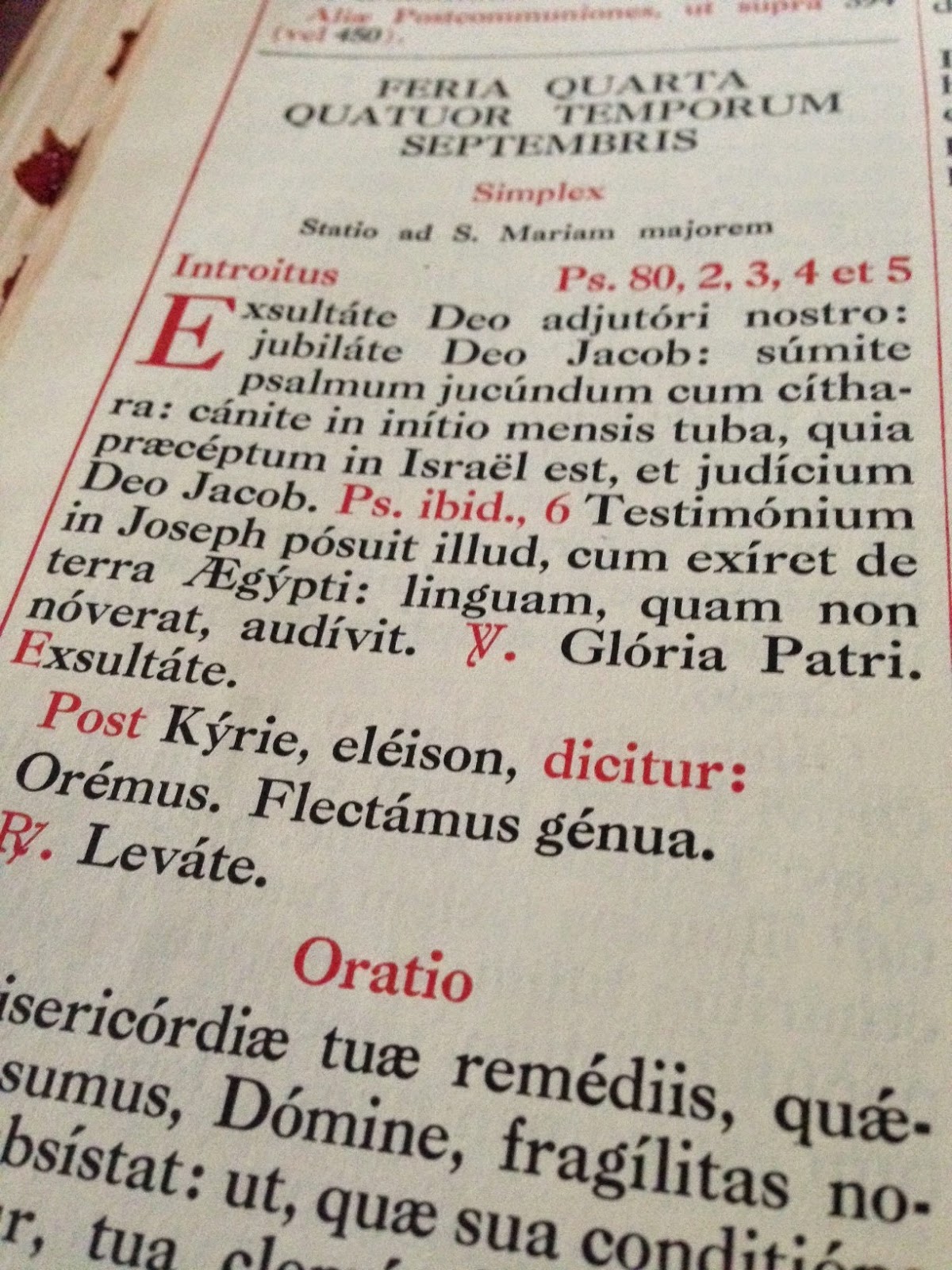 Prior to the late 20th-century's transformation of the traditional Roman calendar, this would have been Ember Week, with Wednesday, Friday, and Saturday designated as the September Ember Days (days of fast and of abstinence from meat - full on Friday, partial on Wednesday and Saturday). For over 1000 years, Ember Days occurred four times each year, corresponding more or less to the four seasons. My grandmother's funeral, which took place on September 22, 1967, was on an Ember Friday. I remember that because, while the Funeral Mass was being celebrated at the main altar in black vestments, I remember constantly being distracted by the side altars where various priests were saying their private Masses in purple (the color of the Ember Day Mass).

All that is long gone now, of course, but it didn't have to happen that way. As serious students of the 20th-century liturgical reform know, that reform did not spring like Athena from the head of Zeus on the day after the Second Vatican Council. On the contrary, it was the fruit of a lengthy process, and many of the changes that came about in the late 1960s had been under consideration for some time and were anticipated in the discussions of the Pontifical Commission for the Reform of the Sacred Liturgy established by Pope Pius XII in 1948. Unlike many of the rubrical and calendrical changes that were to come later, however, the abolition of the Ember Days does not seem to have been envisioned in the pre-conciliar reform agenda. On the contrary, at a meeting of that Commission on February 5, 1952, there appears to have been unanimity that the Ember Days "should be upgraded and that their celebration should be really observed." And, at the Commission's next meeting, on March 11, 1952, there was talk of combining the "Great Litanies" (then celebrated on April 25) with one of the Ember Saturdays. (Cf. The Development of the Liturgical Reform: As Seen by Cardinal Ferdinando Antonelli from 1948 to 1970, by Nicola Giampietro, pp.236 and 238. This volume is a veritable treasure for anyone interested in the ups and downs of 20th-century liturgical history!)

Of course, in the chaotic deconstruction of the liturgical calendar that followed after the Council, both the Ember Days and the Litanies would disappear. Presumably, those few communities that use the older Missal on a daily basis and those rare priests that use the pre-conciliar Breviary still celebrate those days, but for the overwhelming majority of us - clergy, religious, and ordinary lay people - the Ember Days have been completely lost.

Does it matter? It is not just a matter of having lost a particular piece of our cultural inheritance, however important that may or may not ultimately be. It also contributes to our contemporary disconnect from the annual rhythm of the natural seasons (at a time in human history when we would do well to strive to re-establish that connection). In the case of the September Ember Days, it also further distances the Church's worship life from any remembrance of the great Jewish festivals, which the Old Testament prescribes to be observed at this seasonal turning point.

In particular, both the Pentecost and September Ember Days explicitly connected the Church's liturgy with the corresponding Jewish seasonal festivals. Our Christian Pentecost corresponds, after all, to the Jewish Pentecost, Shavuot. So it made sense that two of the four "prophecies" at Mass on the Ember Saturday after Pentecost referred to that festival. Likewise, the second reading for the Ember Wednesday of September was Ezra's account of the reading of the law on Rosh Hashanah (which begins a week from tonight at sunset on September 24), while the first two "prophecies" on September's Ember Saturday were from the prescriptions in Leviticus - regarding, first, Yom Kippur, and, second, Sukkot, the holiday the New Testament typically calls the "Feast of the Tabernacles" or the "Feast of Booths." In discarding the Ember Days, Paul VI eliminated a liturgical acknowledgement of the changing seasons and a reminder of our unique spiritual relationship with Judaism - both things we could probably use more of in contemporary religion.

Finally, the dropping of the Ember Days was one more nail in the coffin of fasting and abstinence and the Church's penitential traditions in general. The Saint Joseph Daily Missal which I used until the mid-1960s described Ember Days as days of "repentance for sins, spiritual renewal, and a special preparation for solemn ordinations." Imagine if we still celebrated ordinations - as was once expected - on Ember Saturdays in purple vestments! How much more fitting than the overblown triumphalism that sometimes characterizes such celebrations nowadays. (Of course, ordinations are joyful occasions for the life of the Church and in the life of the individuals involved. In proper proportion, festivity is certainly in order - for example, on the occasion of the newly ordained's First Solemn Mass. In any case, the penitential character of the Ember Saturday liturgy lent a certain distinctive dimension to the celebration of ordination which was both unique and useful.)

One can argue at length about this or that post-1969 liturgical innovation. Such arguments have only limited utility especially when captured by extremists on either side. Already, back in 1969, Cardinal Antonelli lamented "the irascible insistence of the progressives on the one hand, and the blind conservatives on the other. Both of these are the deadly enemies of the authentic liturgical reform" (cf. op. cit., p. 193).

How sadly true! How different, how much stronger stronger and more effective, the Church might appear today if we had been spared the divisive factionalism of the "liturgy wars"!

We might also have thus been spared such frivolous changes as the loss of Ember Days!