The Pope's Cathedral Is Ours as Well 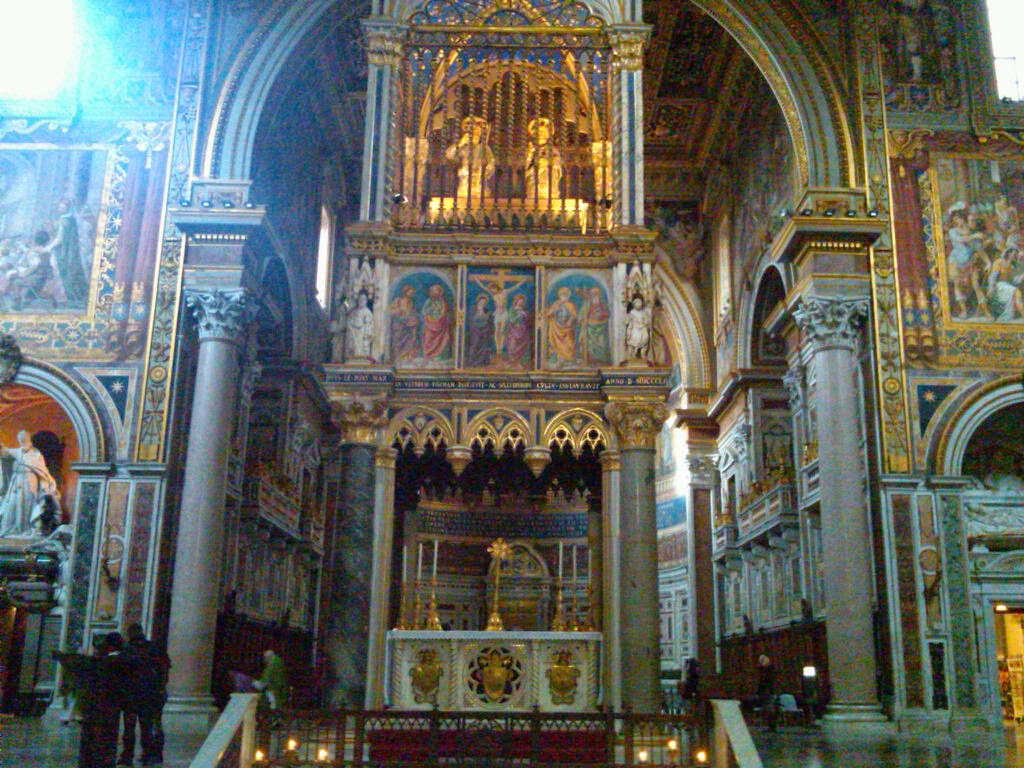 As I wrote in last week’s Parish Bulletin, I spent the past week in Washington, D.C., at our annual Paulist Pastors and Superiors meeting. As in past years, we met at Saint Paul’s College, the Paulist seminary where generations of Paulist students have lived for now just over 100 years. Half a century ago, Saint Paul’s College housed over 90 students! By my time, we hit a high of 30. Now, of course, we count ourselves fortunate to have 10. It is, inevitably, for all of us who have lived and studied there, a place rich in memories and powerful emotional associations.

Today’s feast fondly makes me recall one particular memory. One day some 30 or so years ago, when we were both students, my best friend in seminary was teasing me in the library about my already disappearing hair. I responded by chasing him down the hall and up the stairs into the chapel, where he finally grabbed hold of the altar, and confidently declared, “You can’t hit me here. This is a church!” (And, no, I did not hit him. Actually, I had no intention of doing so. And, yes, we remain good friends to this day).

But the incident and the words my friend said that day haves tuck with me and  remind me what special places churches are. As a priest, I have been very fortunate to have served in two especially beautiful and historic churches – Saint Paul the Apostle in New York, the “Mother-Church” of the Paulist Fathers, and Immaculate Conception in Knoxville, the Victorian Gothic “Mother Church” of this city. There are, of course, many beautiful churches and many styles of churches, each with its own richness. There are ancient Roman basilicas, rugged Romanesque churches, great gothic cathedrals, and beautiful baroque churches. Unfortunately, there are also any number of ugly churches to be seen - sterile modern structures, whose standard-issue ugliness expresses the spiritual impoverishment of our age, and testifies in its own way to a culture that seems at times to be losing its way.

But, whatever they look like, churches are special places. From time immemorial, people have had special sites – hilltops, sacred springs, stone temples – to which to go to worship. God, of course, is personal, not local, and so is not confined to any one place. Still, as human beings, we can only operate in space and time, which is why God himself became human – in a particular place and at a particular time in human history. So it’s no surprise that, through the ages, God has continued to inspire his people to set aside special places in which to assemble to worship him. So Solomon built the Jerusalem Temple to be a holy house of prayer and sacrifice. So too the Roman Emperor Constantine the Great built the Lateran Basilica in Rome to be the Pope’s special church, his cathedral, and hence “the mother and head of all the churches of the City and the world” – the anniversary of whose dedication on November 9, 324 A.D. the Church solemnly celebrates today. [The photo above is of the Lateran Basilica's papal altar.]

So, first, a few words about the place. The Lateran Basilica gets its name from the family, whose palace originally occupied the site. In the 4th century, the Emperor Constantine built a church – not in the center of what was still then a very pagan city, but at the city’s edge - a church that was to be the cathedral of Rome. Originally the church was dedicated to Christ our Savior; but in the 10th century Pope Sergius III added St. John the Baptist to the basilica's title. Hence its popular name, the Basilica of St. John Lateran.

The neighboring Lateran Palace became the papal residence, and the whole complex functioned for centuries as the center of Christian life in the city - until the Popes moved to Avignon, France, in the 14th century. When the popes finally moved back to Rome in 1377, the Vatican Palace replaced the Lateran as the Pope’s principal residence.

Even then, up until the unification of the Kingdom of Italy in 1870 put an end to papal rule in Rome, it remained customary for the Pope to come to the Lateran to impart the Papal Blessing, Urbi et Orbi (To the City and to the World) on certain special days during the year.

So that’s the place. But, when we celebrate the dedication of a church, we also celebrate the people the place represents. That is why the anniversary of a church’s dedication is celebrated liturgically as a feast for all those whose church it is. As the Pope's principal church, the cathedral church of Rome. Saint John Lateran is, in a sense, everyone’s church; and so its anniversary is celebrated universally.

It is no accident that one and the same name, “Church,” is used for both the people who continue Christ’s presence in the world and the place where they assemble to experience his presence most directly, by proclaiming his word and celebrating his sacraments.

But, when we celebrate the dedication of a church, and especially when we celebrate the dedication of a cathedral church, we also celebrate the relationship that binds its people together. As the site of the bishop’s cathedra, the chair from which the bishop exercises his teaching office and pastoral power within the local church, a cathedral is a sign of the unity of believers in the one faith, which the bishop proclaims and represents, which is why having a proper cathedral is so important in the life of a local church.
It is this unique unity to which we refer in the Eucharistic Prayer when we pray for your holy Catholic Church. Be pleased to grant her peace, to guard, unite and govern her throughout the whole world, together with your servant Francis, our Pope and Richard, our Bishop.

Homily for the feast of the Anniversary of the Dedication of the Papal Basilica of Saint John Lateran, Immaculate Conception Church,  Knoxville, TN, November 9, 2014.