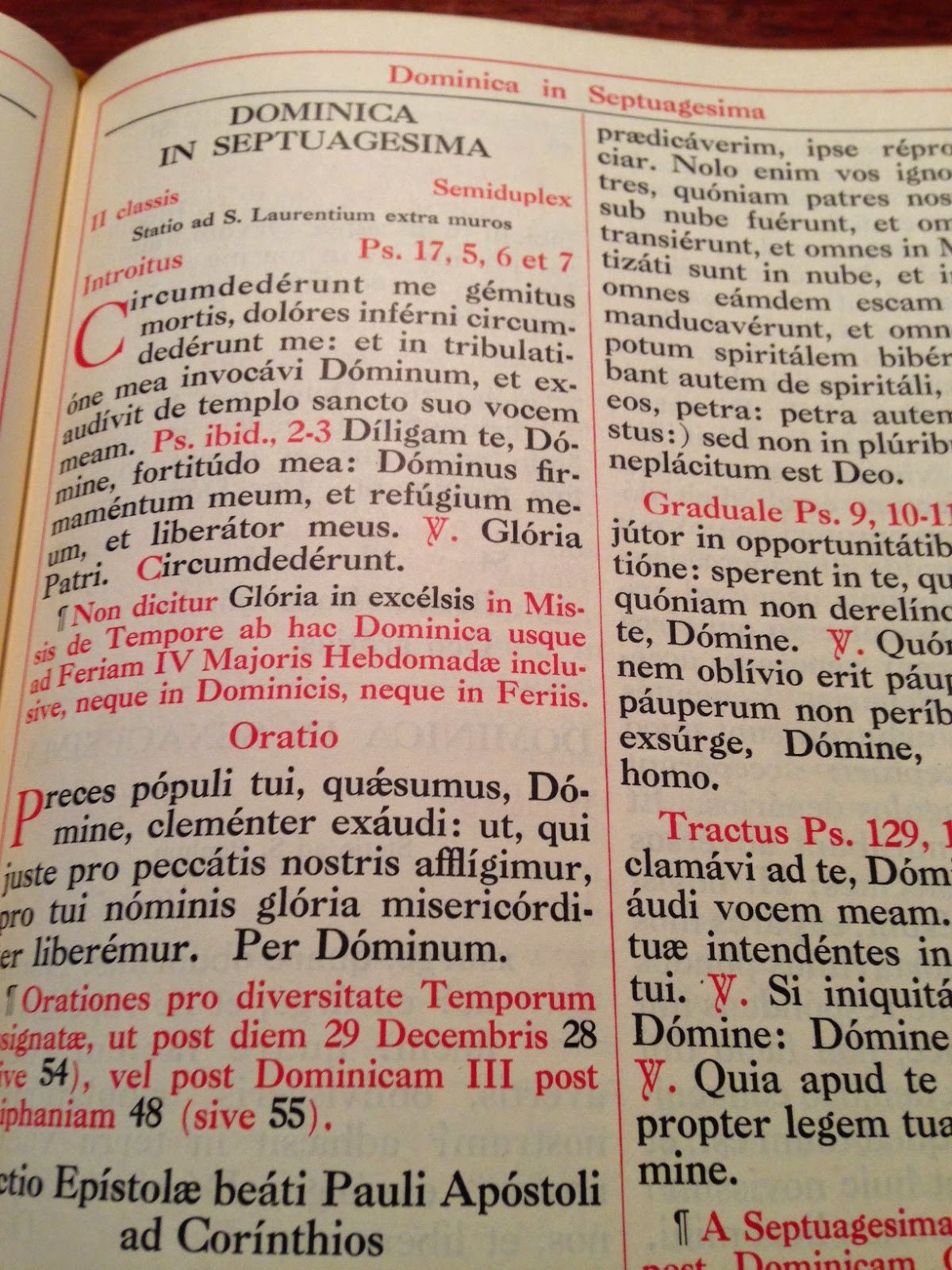 In the old calendar, that the Church enjoyed the use of for some 1500 years, today would have been Septuagesima Sunday, the first of three Sundays that marked off these weeks as a distinctive pre-lenten season. Last year, on February 15, I posted "Missing Septuagesima," reflecting on our loss of this pre-lenten season in the current calendar. (http://rfrancocsp.blogspot.com/2014/02/missing-septuagesima.html).

That generated some modest interest. So I thought I might revisit that topic today. If, on one side of the proverbial aisle, there are fanatics who totally disparage the way the Church worshipped for over 1500 years, there are, on the other, those who seem convinced that the Church's worship reached a state of Platonic perfection with the Breviary and Missal of 1568 and 1570 respectively, to which any improvement is inconceivable and from which all alteration might as well be a sign of the apocalypse. Both positions are absurd, of course. The problem with trying to stake out a plausible position somewhere in between those extremes, however, is that it requires one to make intelligent judgments about which aspects of the post-Tridentine arrangement it may have been wise to alter and which it may have been mistaken to change.

In such matters, I think the saying supposedly attributed to Chesterton may apply: "If it is not necessary to change, then it is necessary not to change." Applying that principle to the liturgy, I can easily acknowledge the obvious merit, for example, of a more extensive Sunday and weekday lectionary, of the restoration of the Universal Prayer, of eliminating Commemorations at least from the Mass (although perhaps not from the Office), and of extending the Kiss of Peace to all Masses - even if the way some of these have reforms have taken shape in actual practice over the past half-century may leave something to be desired. On the other hand, I can just as easily lament the loss of the Last Gospel, for example, and much more importantly regret the wholesale rearrangement of the calendar on questionable premises and with such unimpressive results. To me, the abolition of Septuagesima, Sexagesima, and Quinquagesima Sundays certainly falls in this latter category - along with the abolition of Ember and Rogation Days and the pointless and apparently arbitrary reassignment of so many saints' days.

To the extent that a plausible case could have been made for eliminating pre-lent from the calendar, I think Septuagesima suffered certainly from its inherent in-betweenness - being a little like Lent but not quite Lent yet. Ambiguity is always a challenge, and I think the bureaucracy that created the current calendar probably had very little appreciation for ambiguity. Septuagesima meant purple vestments, no Gloria, and absolutely no more Alleluia till Easter. On the other hand, flowers could still decorate the altar, the organ could still be played at will, and Wedding Masses were still celebrated. The Sunday Masses were proper, but the Office remained that per annum. It was just much too hermaphroditic a season to survive the more binary bureaucratic mindset!

On the other hand, the three now completely lost Sundays each had a magnificent Mass formulary dating back to Pope Saint Gregory the Great's time, and their Roman stational churches - St. Lawrence Outside the Walls, St. Paul's Outside the Walls, St. Peter's - attested to their importance, particularly in terms of the catechumenate. Perhaps, the desire to homogenize traditional liturgical variations that seems to have motivated so much of the reform may have been misplaced. Maybe more discernment might have separated valuable variations from merely antiquarian customs - like the subdeacon holding the paten with the humeral veil in front of his face for much of the Mass, for example. The abandonment  of which quaint antiquarianisms has not really been much of a loss (except perhaps in that case for vestment makers who have lost their market for red, green, and purple humeral veils!)

In an earlier age, all those visual and other variations in the liturgy aided the community in letting the liturgical seasons facilitate faith's connection with the rhythms of ordinary life. Today now that that connection has been almost completely severed, even if Septuagesima somehow were to be providentially restored, how much notice would it even get?