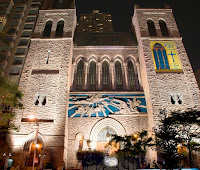 Like Jesus in today’s gospel [Mark 6:1-6a], I’m preaching to my hometown crowd today. Hopefully, I won’t get run out of town and threatened with violence, as Jesus was in Luke’s version of this event!

Even in Mark’s less threatening-sounding account, which we just heard, it’s still such a sad story. Jesus the famous miracle-worker comes home, and his neighbors take offense at him - missing out on a chance to experience his mighty deeds, missing out on more than that, missing out on the whole point of Jesus entirely.

We easily miss things that are staring us in the face. Consider, for example, Pope Francis’s recent encyclical, which has deservedly gotten so much attention. It's a rousing call for religious conversion in the face of the spiritual problem at the root of environmental degradation and evident climate change. But the symptoms - scientific, economic, and political - have been obvious for a long time – just not being noticed or not being paid attention to.

Anyway, what happened to Jesus in today’s gospel is something that happens all the time. Someone we have known forever – a family member, a childhood friend, an old school classmate – has suddenly become somewhat successful. And how do we react? Do we join in the general acclaim? Or do we remember – and remind anyone who will listen – that we knew him or her way back when, when he was still just one of us, just an ordinary nobody? Just who does he think he is anyway, putting on airs now and expecting us to treat him like somebody?

Now, maybe that doesn’t happen all the time, in every single case. Human behavior being what it is, however, and jealousy and envy being the powerful emotional engines that they are, it certainly happens often enough. So, instead of rejoicing in what someone we know has accomplished, we’re likely to be jealous and envious. And, if the opportunity presents itself, the default response may be to denigrate and belittle. So we miss the real opportunity.
So this unhappy - and somewhat uninspiring – episode from Jesus’ life largely rings true, I think, as an example of human behavior in any time or place!

It may also serve as a metaphor for something similar that can easily happen not just in our ordinary relationships with one another, but also in our relationship with God. It’s probably yet another human tendency to seek “spiritual” experience in whatever is different, strange, exotic – and new. Just visit your local bookstore and check out the “Spirituality” section – that is, if there are any bookstores left! (When I was stationed here there were three big ones in very short walking distance). But, anyway, if you visit a bookstore or go online or whatever, it’s amazing, actually, the sheer quantity and variety of options available for the so-called spiritual “seeker.” Even seriously committed, believing, practicing, Christians can be tempted by this apparently desire for extraordinary, exotic experiences, as for example some 1st-century Corinthians were. Witness Saint Paul’s plight in today’s 2nd reading [2 Corinthians 12:7-10]. Paul had to defend himself (and his authority) against other would-be “teachers,” who based their authority on an abundance of extraordinary revelations. In his defense, Paul challenged the claims of his rivals, claiming he had had exotic experiences at least as good and maybe better. But (and much more importantly) he explained how his own personal experience had taught him to put all such special stuff in proper perspective – teaching him to value not his own accomplishments, but the power of Christ at work in his life.

For much of the first 25 years of his life, Isaac Hecker, who founded the Paulist Fathers 157 years ago this week (and who is buried over in that corner), was what we would nowadays call a spiritual “seeker.” For Hecker, however, seeking was never an end in itself. The point of seeking is finding. Hecker found fulfillment in the Catholic Church and he never desired or felt a need to look farther. Along the way, he examined as many as possible of the leading intellectual and religious currents of his time, before finally finding his permanent religious home in the Roman Catholic Church. Like so many of our contemporaries, Hecker could be described as “spiritual but not religious” for much of the first 25 years of his life. But what was so significant about Hecker’s years of searching, of being “spiritual but not religious,” was precisely that he did not remain that way.

The point of the Gospel – what in fact actually makes it “good news” – is that the real seeking and searching has already been done – not by us, but for us, not by us, but by God, God who has found us in his Son, in whom he has become one of us like us in all things but sin, so that he might love in us what he loved in his Son [Sunday Preface VII].

“Is he not the carpenter, the son of Mary?” Jesus’ neighbors at Nazareth knew him and his otherwise ordinary family all too well – too well, tragically to open up their hearts and minds to what God was really doing for them right then and there. The sad result for them was that they got exactly what they were expecting – nothing! No mighty deed took place in their presence. Let’s not make the same mistake ourselves!