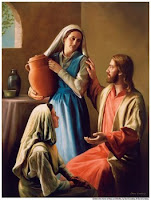 Americans work an awful lot (at least those of us lucky enough to be employed). Just the other day, I saw something on the BBC comparing how much less vacation time American workers are entitled to, compared with their European counterparts - and how, even then, many Americans don't even take the full vacation time they are allotted. And, of course, we have modern technology - especially the ubiquitous cell phone - to keep people working even when ostensibly vacationing. We are increasingly a nation of actual and would-be workaholics.

An interesting thing to think about on this feast of Saint Martha!

In John’s Gospel, Saint Martha engaged Jesus in one of the Gospel’s most famous dialogues, first reprimanding him for showing up late for her brother's funeral, then eliciting from him the powerful proclamation, I am the resurrection and the life. In response, Martha made her great profession of faith: Yes, Lord. I have come to believe that you are the Christ, the Son of God, the one who is coming into the world.

For centuries the standard Gospel reading at most Catholic funerals, that account (John 11:19-27) has solidified Martha's status not only as one of Jesus' intimate friends, but as a disciple and an evangelizer.  Yet, for most people perhaps, the Martha story which has had the deepest impact upon her reputation is the account of one of Jesus' other visits to her home, at which she provided hospitality for him and his disciples, but also remonstrated with him about her sister Mary's not helping her out with the household chores (Luke 10:38-42). If anything, the very obvious ordinariness of the situation and the ease with which we can all identify with one sister or other in Luke's story has guaranteed its perennial popularity.

Ours is a society in which we define ourselves for the most part by our work. Of course, as our current debates over increasing income inequality illustrate, our society honors and rewards wealth much more than it rewards work, and there is obviously no connection between working hard and being rich. But, after wealth, we do seem to place the greatest value on our work. For the vast majority of us, it is work which provides whatever degree of respect our society allows to the non-wealthy. And, inasmuch as work has always been necessary for most people, I think Martha's complaint about her sister must have resonated with most people as just commonsense. Of course, even if there is more to life than work, still the work has to get done!

Thus I'm sure that Jesus and his disciples wanted their dinner! So I think they valued Martha's efforts to be hospitable. (Certainly, the Church has seen Saint Martha a model of service, a sentiment evident in today's Collect. And it is no accident that the Vatican hotel - where the Pope presently lives - is named for her, Domus Santae Marthae - or that she is the patron saint of housewives, cooks, and waitresses.) I think that Jesus was not criticizing Martha so much as offering her some helpful advice about her priorities: Martha, you are anxious and worried about many things.

Again, Jesus' point to Martha - and through Martha to us - wasn't exactly that there is nothing to be anxious and worried about, but that the solution to our anxieties and worries is not in intensified focus on ourselves (what we do when we get anxious and worried, but rather a redirected focus on him - just as later on, at Lazarus' tomb, Jesus would refocus Martha's attention away from her frustrations about the schedule and onto him as the resurrection and the life.