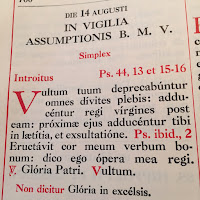 “I miss all the Vigils. Why on earth were they suddenly suppressed?”

So wrote the 20th century's most famous monk, Thomas Merton, on December 7, 1959, which until recently had been observed as the Vigil of the Immaculate Conception. When Merton wrote that, today (August 14) was still the Vigil of the Assumption. Prior to the rubrical reforms of 1955, the Roman Rite had 16 vigils of varying rank. After 1955, the Roman Rite retained only 7 (those of Christmas, Pentecost, the Ascension, the Assumption, Saint John the Baptist, Saints Peter and Paul, and Saint Lawrence), suppressing the other 9 (those of the Epiphany, the Immaculate Conception, All Saints, and the Apostles Andrew, Thomas, James the Greater, Bartholomew, Matthew, and Simon and Jude.) But now, since the 1969 calendar reform, it has none at all. Not even Christmas Eve survived the bureaucrats' cut!

There are, of course, a great many factors (both liturgical and non-liturgical) that have contributed to the erosion of the liturgical calendar's impact on people's consciousness, and it is fair to argue that in a post-Christian culture the deck is already sufficiently stacked against a serious liturgically based spirituality. That said, the general flattening of the calendar, however modest a part of the overall picture, certainly hasn't helped.

Of course, what really gave vigils even greater salience well beyond the few faithful who attended daily Mass (and who might therefore have taken note of the vigils' violet vestments and their significance) was the practice of compulsory fasting and abstinence on at least the more important vigils. I am old enough to remember when fasting and abstinence were still observed on the vigils of Christmas, Pentecost, Assumption, and Immaculate Conception. My guess is that in an even earlier era fasting and abstinence were likewise observed on some of the other vigils as well. In contrast to today's almost uniformly flat weekly calendar, that widespread and recognized practice helped to highlight at least some of the greatest festivals as they occurred during the week.

A story. On one December 7, not quite 60 years ago, My mother, my sister, and I went to Macy's on 34th Street to buy new shoes for Christmas. As we were being fitted by one of my mother's Jewish co-workers, she asked my mother what holy day it was that day. What had made her think it was a Catholic holy day? She had inferred that it was a Catholic holy day because so many people were eating fish in the local eatery! My mother explained to her friend that the next day was the actual holy day, and that what as being observed that day was the vigil (hence the fish).

Can anyone imagine such a conversation occurring today? More to the point, when a major holy day occurs on a weekday, what are the chances of almost anyone even noticing at all?