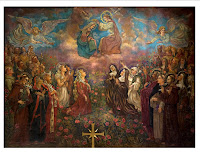 Today the Church celebrates the great and ancient feast of the Assumption of the Blessed Virgin Mary (a feast my grandmother affectionately used to call La Madonna di mezz'agosto, "Our Lady of Mid-August"). But one might easily be excused for not noticing it here in the United States, where once again the celebration of a major holy day is seriously attenuated by the misfortune of its falling on a Saturday this year. (Next year the Assumption will fall on a Monday, thanks to Leap Year, which will have essentially the same effect.)

The curious American practice of dropping the obligation from some of our few remaining holy days of obligation whenever they fall on either a Saturday or a Monday is one of the more difficult things to explain. No doubt it was done with the best of intentions, but its de facto legacy will likely be to be remembered as part of the late 20th-century's dismantling of a once vibrant American Catholic culture. Why Monday should be any less sacred than Tuesday or Wednesday is anybody's guess. In the end, of course, Tuesday and Wednesday suffer too, since it is the holy days themselves that are the ultimate losers in this process - as is the very idea of sacred times intruding into conventional secular time, as that very notion becomes increasingly incomprehensible.

If anything, the make the proper impact, we need more holy days - not fewer!

Given the great mystery that it celebrates, the Assumption represents that sacred intrusion into secular time in an especially heightened way. It certainly deserves to be a full-fledged holy day every year!

In his meditation on the Assumption, which he attached to his 1961 Apostolic Letter on the Rosary, Pope Saint John XXIII wrote:

"[The Assumption] is a source of consolation and faith, in days of grief or pain, for those privileged souls - such as we can all become, if only we respond to grace - whom God is silently preparing for the most beautiful victory of all, the attainment of holiness."