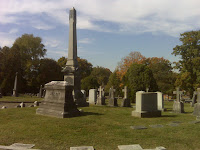 According to the great Pius Parsch, the lit candles traditionally recommended to be held by the people during the Requiem Mass signified "the suffering souls whose places we are taking and for whom we are begging 'eternal light'." What a wonderful image! What a vivid impression of the communion of saints, of how we are all interconnected, all somehow still in this together! In this era of increasingly diminished social solidarity, what an important lesson that custom afforded, as does the entire idea of today's Commemoration of All the Faithful Departed.

It was just 100 years ago, during the 1st World War, which Pope Benedict XV called "the suicide of civilized Europe," that that same Pope, on August 10, 1915, issued the Apostolic Constitution Incruentum Altaris, in which he extended to priests everywhere in the world the privilege previously granted by Benedict XIV in 1748 to the Kings of Span and Portugal, permitting Spanish and Portuguese priests to celebrate three Mass on All Souls Day. Benedict XV's motives for universalizing this practice were the loss of so many previously established pious provisions for prayer for the dead during the modern era but also in particular his paternal concern for the many young soldiers who were even then dying in that terrible war. (This nowadays under-appreciated privilege, which has never been revoked, permits every priest to offer three Masses for the dead today: 1) for a specific intention, 2) for all the faithful departed, and 3) for the intentions of the Pope.)

Another custom connected with All Souls Day which likewise highlights our interconnectedness and challenges us to intensified solidarity is that of visiting the cemetery. That custom too is under-appreciated today - as indeed are cemeteries in this era of cremation and abridged funerary rituals (what Hamlet might call "such maimed rites"). Thankfully, it still survives here in Knoxville where yesterday afternoon some 85 people gathered at our local Catholic cemetery for the annual recitation of the Rosary for those buried there and for all the faithful departed. The Church earnestly tries to encourage such customs by granting a plenary indulgence (applicable only to the souls in purgatory) daily from November 1 through 8 to those who devoutly visit a cemetery and pray there (even if only mentally) for the dead.

As I said yesterday on All Saints Day, remembering is a uniquely and fundamentally human activity. To remember those who have died is to acknowledge the importance of their lives - and the common humanity we share with them. To remember those who have gone before us in faith is to celebrate the different ways in which the grace of God touched and transformed each one of them - and to affirm the hope that we share with them. So today we pray that all who have died in God’s grace and are now being purified from the consequences of their sins may be admitted to the fullness of his kingdom – there to join the saints already in glory. Our prayers express our ongoing participation in that great eternal community in which hope is fulfilled in love and sin succumbs forever to forgiveness.