As Another Advent Beckons 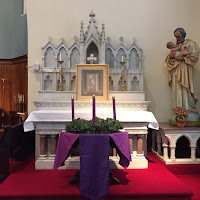 This past Wednesday, on November 25, the Church commemorated Saint Catherine of Alexandria, a 4th-century Egyptian philosopher and martyr, who is a patron of philosophers and preachers, and under whose patronage Saint Catherine's monastery at Mount Sinai is named and dedicated. She is also one of the famous "14 Holy Helpers," and her intercession is invoked against sudden death. Like so many others, she was dispossessed of her feast day in Paul VI's calendar, but has thankfully been restored in the later edition of the Roman calendar to her traditional position on the cusp of Advent.

In Around the Year with the Trapp Family (1955), Baroness Maria von Trapp (on whose life-story The Sound of Music was loosely based), quoted an old expression allegedly common in Catholic countries (at least in the traditional Austria with which she identified): "Saint Catherine closes the door of the dance hall until the three Holy Kings throw it wide open again." This saying referred to the imminent season of Advent which, for all of its history until very recently, was considered a "closed time," a penitential season which precluded big festive wedding celebrations.

Sadly, apart from the violet vestments and the omission of the Gloria at Mass, most traces of the penitential character of Advent have disappeared, as Advent has simply become the staging ground for the Christmas shopping season (much as Thanksgiving has progressively degenerated into a mere prelude to "Black Friday").

The Paul VI liturgy left Advent more or less intact, except for the trashing of the ancient Ember Days and of the Vigil of Christmas. Its classically beautiful, apocalyptic antiphons and other texts largely survived. But while the letter of the liturgy may have survived, the season's spirit seems to have been lost in a complete capitulation to something called "devout and joyful expectation." Traditionally, Advent was a continuation of the eschatological emphasis of the weeks that immediately preceded it. The anticipation (with proper fear and dread) of Christ's Second Coming and the joyful commemoration of Christ's First Coming at the end of the Advent season worked together to highlight Christ's immediate presence in the present - especially emphasized in the 2nd and 3rd Masses of Christmas. But who pays attention anymore to the 2nd and 3rd Masses of Christmas, when Christmas itself has more and more become all about Christmas Eve and Children's pageants? It's almost as if we were setting out to confirm what so many of the once-a-year Christmas attendees may already think, that Christmas is cute and that religion is nice for children but is of little relevance to actual adult life!

So what to do about Advent? One thing not to do is become a liturgical kill-joy and act as if Advent and Christmas were in some kind of competition (a competition Christmas will surely win and Advent surely lose!) It's all one story, after all. Treating the liturgical cycle of seasons as if it were some sort of play-acting and we were all patiently waiting to see if Jesus will be born on Christmas really doesn't work - nor should it. The problem is not some supposed competition between Advent and Christmas but the unseriousness of both Advent and Christmas in today's "Holiday" season. The problem is not whether one's Tree is already up at home but whether one's heart is at the mall. The Advent Wreath is not an alternative to the Christmas Tree. It is, in any case, itself just another cute folkloric custom, which in its contemporary incarnation can become yet another frivolous substitute for Advent's challenging message about the impending Day of Judgment.

The problem is bigger than any one person or parish can resolve. But, for a start, how about taking seriously the simultaneously warning and reassuring words of the Advent gospels, hearing them as spoken to us today, to our own conflicted and frightening time? And, while we light our Advent wreath's colored candles, how about taking seriously the cosmic seasonal symbolism of Christmas, which comes not in June when the sun is high and the sky is bright but when the world is cold and dark and desperately in need of new light?

Or have we so capitulated to the saeculum as not to notice how desperately the world needs new light?