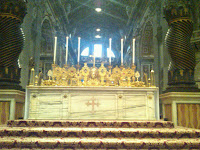 One of the mistakes made in the Pauline reform of the Roman Liturgy was the unwarranted textual tinkering and rearrangement of the daily Masses on the weekdays of Lent, some of which were very ancient texts in fact. The mandate for a multi-year lectionary may indeed have justified certain changes in the Sunday Masses, but no comparably compelling reason warranted the weekday changes. One consequence, of course, is the loss of the connection between the ancient Roman stational churches and the texts which were often originally selected with the stational church in mind. (In fact, the stations are no longer even mentioned in Paul VI's Missal.)

So, for example, the American church in Rome, Santa Susanna, was the stational church for the Saturday of the 3rd Week of Lent. For that reason, the famous story of Santa Susanna's Old Testament namesake in Daniel 13 was read at Mass on that day and, to parallel that, the Gospel reading was that of the woman caught in adultery (John 8:1-11). In the Paul VI liturgy, for no apparent reason, those texts are now read instead on the Monday of the 5th Week of Lent, severing the ancient link between the stational church and the liturgy celebrated there.

Nonetheless, there has been a genuine revival of interest in the Roman stations.  In addition to the principal (Italian) celebration each afternoon, other language groups also celebrate stational Masses, at least on the weekdays. For me, one of the special joys of living in Rome for much of Lent 2012 was being able to concelebrate at the English-language stational Masses, celebrated daily at 7:00, organized by the students at the North American College. Not only priests and seminarians, but ambassadors and many other English-speakers living or working in Rome participated and formed a uniquely vibrant congregation.

Until 1969, the name of the stational church was listed as part of the heading for each day's Mass. That made it easy for anyone, anywhere int he world, to identify with the ancient origin of that day's liturgy. It may be harder now, but not impossible. And anyone who ever gets an opportunity to do the lenten stations at least once in his or her life should certainly try to do so.

As I wrote back then:

There is something special about going to these venerable Roman churches in the early pre-dawn darkness, walking literally in the steps of centuries of Christians who have visited those same churches on those same days, celebrating Mass surrounded by the relics and memories of martyrs, then emerging in the early morning light to continue one’s daily work. It is a true experience of the communion of saints! As the Italian Humanist Petrarch (1304-1374), describing his experience as a pilgrim in Rome in the Holy Year 1350, wrote: “How inspiring for a Christian to journey to that city which is like a heaven on earth, sanctified by the remains of martyrs beyond number, drenched in the precious blood of those early witnesses to the Truth.”

(Photo above is of relics exposed on the papal altar at Saint Peter's Basilica for the stational Mass on the Saturday of the 1st Week of Lent.)