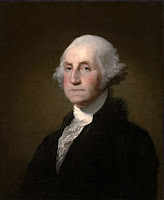 A week ago, we were treated to yet another one of our recently invented post-holiday American "holidays," namely "Presidents' Day." Actually, "Presidents' Day" - with our without the apostrophe - is not the holiday's official title. When the Uniform Monday Holiday Act of 1968 was being drafted, there was a proposal to rename the holiday "Presidents' Day" in order to honor the birthdays of both President George Washington and President Abraham Lincoln, hence the plural possessive form (with the apostrophe after the "s"). But that failed in committee, and the final bill kept the traditional name "Washington's Birthday," for the transferred holiday.

Even so, "Presidents' Day" - as an ostensible celebration of multiple presidents, not just Washington or even Washington and Lincoln - has become the common popular name for the holiday. But, of course, the ill-advised transfer of the holiday to a Monday (which never occurs on Washington's actual birthday) guarantees that - like so many other once genuinely civic holidays - it is really what I call a "post-holiday," i.e., a day for shopping or part of an extended school vacation, rather than a commemoration of anyone or anything.

When I was a boy growing up in the 1950s, we had two standard school holidays in February: Lincoln's birthday on February 12 and Washington's on February 22. (The latter was a federal holiday. The former was a state holiday in New York and in most of the other non-confederate states.) There were lots of such civic holidays then - Columbus Day, Election Day, Veterans Day, Memorial Day, Independence Day, and Labor Day. Only Labor Day was permanently assigned to a Monday. A "holiday weekend" might happen now and then, but it was not the norm. And there was still at least some awareness of what the holiday's name meant, what the holiday was supposed to commemorate or celebrate. Civic holidays had not then yet become just excuses for shopping or extended vacations, which is all they are now.

More shopping and more week-long school "breaks" may be problematic enough in themselves. (We shop too much in contemporary America, and students learn too little). But they are also a symptom of the loss of our common civic culture. Like liturgical feasts and seasons in the Church's annual calendar, our civic holidays were markers that reminded us of important episodes in our common past and reinforced our civic identity. And, of course, it was our common civic identity that distinguished the US from other societies. If America was once an exceptional nation, it was precisely because it assimilated so many different cultural identities into one common civic identity, which was democratic and egalitarian, and which attracted immigrants from all over the world. We still attract immigrants, but our society has increasingly lost much of its democratic and egalitarian luster - thus eroding America's exceptionalism in the process.

Washington's Birthday (his real birthday, tomorrow, not his phony "post-holiday" a week ago) is a fitting reminder of the common civic culture we have lost. Washington himself embodied so many of the traits we associate with that culture at its best. In failing to remember and honor him appropriately, we also fail to remember and honor those civic virtues he was believed to embody. And we diminish ourselves and further erode whatever may be left of our once-vibrant common civic culture.
Posted by City Father