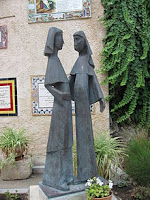 The Visitation of of the newly pregnant Virgin Mother of God to her also pregnant, but older relative Elizabeth has long been an event of singular fascination. Luke's account highlights Elizabeth's uniqueness in having already been let in on Mary's secret in time for Mary's arrival, thus making them at that moment the only two people on the entire planet aware of what a wonder God was doing in the world. That gave their meeting a unique intimacy - as suggested, for example, by the beautiful statue (photo) at the supposed site of the Visitation in the ancient village of Ein Karem, which is now a neighborhood in modern Jerusalem.

A feast of medieval origin, the Visitation was happily celebrated for centuries on July 2 (to connect it closely with the feast of Saint John the Baptist), until the Paul VI calendar transferred it to today. German Catholics, however, continue to celebrate the Visitation on its traditional date - as do Anglicans and Lutherans.

The Visitation is also the 2nd Joyful Mystery of the Rosary. It invites us to meditate on Mary's rapid response to the prompting of the Holy Spirit in her readiness to offer direct personal assistance to her relative in need. But there is also another dimension highlighted by the feast - the sanctifying action of divine grace in the (as yet unborn) John the Baptist, whose "leap for joy" then graces his mother, making possible her greeting of Mary. In the intimate interaction of the two pregnant mothers, their sons are already at work - Mary's Son bringing grace, Elizabeth's announcing it. And their mothers - alone at that moment among the human race - respond with some of the most famously eloquent words of prayer and praise ever uttered, prayers repeated daily in the piety of people and in the liturgy of the Church.

Thus, the Venerable Bede called it "an excellent and fruitful custom of holy Church that we should sing Mary's hymn at the time of evening prayer." In our over-familiarity with the sacred words, we routinely recite the Magnificat (and even more so the Hail Mary), almost unmoved by the mystery at work in what is being recalled. Such routinization is inevitably inherent in our familiarity with the sacred.

But such familiarity is in another sense what the Incarnation intends to accomplish. The encounter between Mary and Elizabeth and the spiritual energy it generated actually highlights how mystery penetrates the mundane - and challenges us to be alert to respond to it in the ongoing Ordinary Time of daily life.
Posted by City Father