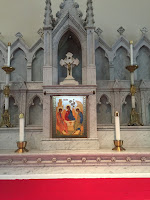 We sang the Regina Coeli at Mass for the last time in 2016 yesterday. And so now we are back to Ordinary Time!

Whenever I am required to use that unimaginative, modern liturgical neologism Ordinary Time, I immediately find myself pulled to counter-images, both religious (e.g., the traditional terms that used to be used to describe this season) or secular, such as the title of Doris Kearns Goodwin's wonderful 1994 book No Ordinary Time: Franklin and Eleanor Roosevelt - The Home Front in World War II, which won the Pulitzer Prize for History in 1995.

The amazing couple and the era which Goodwin recalled in her book were indeed anything but ordinary. In fact, one would be hard pressed to identify what era in modern history has really been ordinary. If Goodwin's era of the "Greatest Generation" was extraordinary in a heroic kind of way, then the dissolution of their cultural world, that in my lifetime recognizably began in the 1960s, has surely likewise been "no ordinary time." In fact, secular time is seldom if ever ordinary.

But then neither is sacred time.

Yesterday, on Pentecost, I called Ordinary Time "the time of fulfillment, the time of the Church, when the promise of Christ’s resurrection should be reflected in our ordinary lives." Pentecost, I suggested, "ritualizes annually what happens weekly with the transition from Sunday to Monday. From our Sunday celebration around the unleavened bread which has become the body of our Risen Lord, we are sent forth, filled with the Holy Spirit, to renew the face of the earth as the Risen Christ’s permanent presence in the leavened bread of our daily lives in our ordinary world."

That connection may have been more obvious back when this season was labelled "Time After Pentecost" and its Sundays numbered accordingly. However that may be, the connection remains.

Someone recently referred to Ordinary Time as "our long slog toward Advent." If Pentecost points us back to the beginning of our communal life as the Church in the world, Advent points us ahead to the finality for which we claim to await with joyful hope and which in any case challenges us by its sheer inevitability to make the most  of the present, however long or short it turns out to be.

As Saint Irenaeus (130-202) taught (Adversus Haereses): "Now, through the Spirit, the image and inscription of the Father and the Son have been given to us, and it is our duty to use the coin committed to our charge and make it yield a rich profit for the Lord."