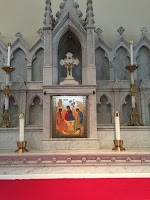 At least where I came from, everyone knew - and could be presumed to know - the story of Saint Patrick and the shamrock. And, for many, that (possibly apocryphal) account about the great missionary may well be the extent of what was known about the Trinity. In theory, certainly, the Trinity is the central mystery of Christian faith, for it is about who God is in  himself. And who God is in himself has been revealed to us in how God acts, which takes us beyond our naturally accessible knowledge of God's mere existence. So, obviously, the doctrine of the Trinity is very important. Even so, I suppose that for many Christians, the Trinity is more like an abstract idea - a doctrine to be affirmed and believed in - but not something that one thinks a lot about in the course of one's ordinary life

Which is surely a shame - and surely an incentive to highlight tomorrow's festival of Trinity Sunday, originally introduced into the Roman calendar by Pope John XXII in 1334 and no less needed in the calendar now than then. (Until the 1960s, the Quicumque vult or "Athanasian Creed" was obligatorily recited at Prime on Trinity Sunday, a noble practice well worth retrieving.)

The ever eminently quotable Pius Parsch wrote that Trinity Sunday "may well e regarded as the Church's Te Deum of gratitude over all the blessings of the Christmas and Easter seasons ... a synthesis of Christmas, Epiphany, Easter, Ascension, and Pentecost."

As Saint Paul said, in his letter to the Romans, to be read to us at Mass this Trinity Sunday:
We have peace with God through our Lord Jesus Christ,
through whom we have gained access by faith
to this grace in which we stand, and we boast in hope of the glory of God ...
because the love of God has been poured out into our hearts
through the Holy Spirit that has been given to us.
[Romans 5:1-2,5]

The role that Saint Paul ascribes to the Holy Spirit is the same one which Jesus ascribed to the Spirit of truth in the corresponding Gospel reading.  And it in turn can be likened, in a certain sense, to the Holy Spirit's activity within the inner life of the Trinity. As the Holy Spirit expresses communion among the three divine Persons within the trinitarian life of God himself, the Holy Spirit also unites us to the Father and the Son, guiding us to all truth [John 16:12-15].


From the day when we were each baptized in the name of the Father, and of the Son, and of the Holy Spirit, the lives of all of us, both individually and as a Church community – have been defined, formed, and shaped by the uniquely awesome mystery of who God is, God’s inner relationships as Father, Son, and Holy Spirit, that define the Triune God’s outward relationship with us and so in turn ours with God.

United with one another in the Body of Christ by the Father's gift of the Holy Spirit, the Church is something infinitely more than a sociological institution. It is rather a relationship, rooted in God's inner life and reflected in God's action, a relationship with the potential to transform the world.