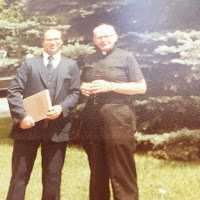 Paulist Father James Finley (February 4, 1915-September 7, 1996) had a distinguished career as a priest, mission preacher, vicar general of his community, local superior, and parish pastor before retiring to senior ministry status in the late 1970s and taking up residency at the Paulist Fathers' novitiate in Oak Ridge, NJ. It was perhaps an odd choice of residence, since he himself had largely unhappy memories of his own novitiate year there in the early 1940s, but it proved providential for a decade and more of novices whose formation experience he became a part of  and with whom he shared the wisdom of his own life experience.

He kept to himself much of the time, except when explicitly asked by the Novice Master to give us a talk or some practical guidance on preaching. Mainly we saw him at dinner most evenings at which he often regaled us with stories from the community's distant and not-so-distant past. For many of us, he became a valued confidant - and later on a friend.

After my First Profession in August 1982 (photo), whenever I came back to visit the novitiate community at Oak Ridge, I looked forward to knocking on Jim's door and spending an hour or more with him chatting about what was going on in my life and getting his take on the goings on in the community. Jim could be quite critical of things, but he had an important and valuable long-term perspective which informed his short-term assessments. Anyway, he always liked me and always showed real interest in me as a person and was always sympathetic and supportive of me in my troubles.

He was, accordingly, very happy for me when I was finally ordained. In November 1995, when I visited the novitiate as a newly ordained priest and the novice master kindly invited me to celebrate Mass for the community, Jim paid me the honor of attending the Mass. Attending another priest's Mass that way was something he seldom did, but he told me that after such a long wait, he really wanted to be there. That too meant a lot to me.

I visited him once more the following summer, but by then he had already become ill and was in evident decline. He died not many weeks later, 20 years ago today. He is buried in the local parish cemetery of Oak Ridge's Saint Thomas the Apostle Church, along with more than 70 other faithful Paulist priests, whose bodies were reinterred there when our beautiful novitiate property was sold to the state of New Jersey. Many of those buried there I never knew personally, but shared with them a precious common vocation. Some, like Jim, I remember fondly as true friends. Someday, I too expect to be buried there with all of them.