The Dawning of Salvation 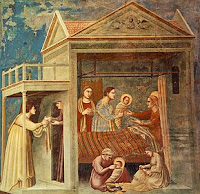 Your birth, O Virgin Mother of God, proclaims joy to the whole world, for from you arose the glorious Sun of Justice, Christ our God; he freed us from the age-old curse and filled us with holiness; he destroyed death and gave us eternal life.

Those words (from the antiphon at the Benedictus at Morning Prayer today) summarize the significance of the Church's celebration of the birth of the Blessed Virgin Mary.

(The photo is of Giotto's early 14th-century fresco of the Nativity of Mary in the Scrovegni Chapel in Padua, Italy.)

Today's celebration is one of the oldest Marian feasts in the calendar. Its origin is thought to be connected with the dedication of a church in Jerusalem - now known as the Church of Saint Anne - erected on a site associated in tradition with the home of Mary's parents. From the Eastern Church, the feast came to Rome toward the end of the 7th century. The celebration of Mary's day of birth (a liturgical privilege she shares only with Jesus and John the Baptist) is also an early testimony to the Church's faith in Mary's freedom from sin from the beginning of her life.

Curiously, a similar idea also exists in Islam. In Muslim tradition, Mary and Jesus are the only two born totally free from Satan's power. The Quran also recounts Mary's birth in a story seemingly influenced by the Old Testament account of Hannah's conceiving and giving birth to Samuel (cf. I Samuel 1).

A sermon ascribed to Saint Augustine, which used to be read in today's Second Nocturn, highlights the ancient patristic parallelism between Mary and Eve: The canticle of Mary silenced the wailing of Eve. In the contemporary Office, the Mary-Eve parallelism is expressed through the scripture reading from Exodus 3 (replacing the traditional First Nocturn readings from the Song of songs). Then, instead of Augustine, it is Saint Andrew of Crete whose words we read. For him, Mary's birth was the prelude to the foreordained union of the Word with flesh and is the mystery that stands at the frontier where types and symbols give way to reality, and the old is replaced by the new.

Lots to think about on this feast!

Meanwhile, here in East Tennessee, today marks the 28th anniversary of the creation of the Diocese of Knoxville. Accordingly, today's feast is observed as the patronal feast of this diocese.