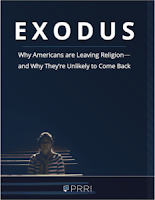 Last week, the Public Religion Research Institute (PRRI) released a very sobering report - which no pastor, parent, or other religiously concerned person should ignore - on the increasingly remarked phenomenon of the "Nones," that rapidly growing number of religiously unaffiliated Americans. The report, which is actually quite short and easy for the non-statistician to read and comprehend, is entitled Exodus: Why Americans are Leaving Religion - and Why They're Unlikely to Come Back. It can be easily accessed online at
http://www.prri.org/research/prri-rns-2016-religiously-unaffiliated-americans/.

It wasn't all that long ago that the US was widely seen as the great outlier in the seemingly inexorable dynamic of secularization that has already transformed what was once Christian Europe. Either the US is (for whatever reason) belatedly just catching up with other "First World" societies, or somehow something else (more unique to the US) is at work here having a similar effect in what is really a very short time. In this regard, it is not entirely unlike the rapid - and (for that reason) until recently unexpected - radical transformation in popular attitudes toward LGBT people. In fact, there may well be a substantive connection between the two developments. At minimum, the two trends have proceeded in tandem as part of an overall societal transformation.  Hence the importance of studies such as this one.

According to the aptly named Exodus report, while only 25 years ago just 6% of Americans claimed no religious affiliation, today it is 25%, which makes the "Nones" the largest identifiable "religious group" in the country. The numbers are even more frightening regarding young adults (ages 18-29), 39% of whom are now religiously affiliated. Among Catholics, the numbers are also very telling. some 31% of Americans claim to have been raised in a Catholic home, but only 21% identify as Catholics now.

As the young adult numbers might suggest, abandonment of one's religion seems to occur early in life. Of the Nones, 62% say they abandoned their childhood religion by age 18.

Particularly revealing are the reasons cited for leaving one's religion. The most mentioned reason was ceasing to believe in the religion's teachings. The second was having been raised in a family that was never that religious. The third was the experience of negative religious teachings about or treatment of gays and lesbians. Catholics in particular cited this third reason more than others did.

There is a lot more in the Report, but these fundamental findings should be enough to inspire some serious self-examination among pastors, parents, and other concerned about the future of religious faith in America.

In a world in which church attendance is no longer a mark of social respectability, it should come as no surprise that many of those who grew up in religiously relatively lukewarm families have taken the next step and gone all the way to becoming unaffiliated.  Still the number one reason given for disaffiliating is no longer believing church teachings. Of course, there have always been any number of reasons for unbelief, which have undoubtedly proliferated since the ascendancy of modern science.  But, while there may be many reasons why religious belief seems increasingly implausible to so many people, surely the fact that so many report simply ceasing to believe in religious teachings ought to challenge those whose responsibility it is to pass on the faith to the next generation to consider why we have been doing so poorly.

Arguments about the language of the liturgy or whether we should all pray facing the same way or facing each other are not unimportant, but their salience diminishes if fewer and fewer people are even bothering to be there. And, while not everything can be blamed on the catastrophic collapse of  effective catechesis, surely several decades of that have taken their toll on the mere plausibility of religious belief among those on the receiving end of inadequate instruction.

And then there is the third reason given for leaving religion. When 29% in general (and 39% of those raised Catholics) cite religious negativity toward gays and lesbians as a factor, that certainly says something significant - not least, perhaps, about the prudence of some apparent alliances between religion and right-wing politics in recent decades. (An obvious counter-example worth recalling would be how the Church first fought against the liberalization of civil divorce laws, but then - having decisively and irreversibly lost that battle - it stopped fighting the issue in the political arena, while still retaining its own beliefs about marriage within the life of the Church.)

This PRRI report raises important issues that are also themselves part of a larger and growing discussion about religion's changing role and uncertain future in American society. There are at least two recent books that go into these and related issues in a way which < I think, really makes them must reads for those who care about America's religious future. They are Getting Religion: Faith, Culture, and Politics from the Age of Eisenhower to the Era of Obama (Convergent Books, 2016) by long-time Newsweek Religion editor, Kenneth L. Woodward,  and  The End of White Christian America (Simon and Schuster, 2016) by PRRI's founding CEO, Robert P. Jones.