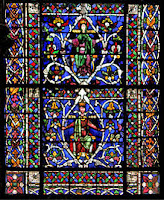 Back when I was studying scripture in seminary, a common approach to the "infancy narratives" (Matthew 1-2 and Luke 1-2) was to see each as in some sense a summary of or introduction to its particular Gospel's themes. In a famous commentary (The Birth of the Messiah, 1979), Raymond Brown sought simultaneously "to point out their common tendencies and emphases" and "to show how each fits into the theology if its respective Gospel," indeed how "each is the essential Gospel story in miniature." Brown was well aware "that people who know little of Jesus, beyond his death on the cross and his resurrection, are often acquainted with the Christmas story, which accordingly offers a channel through which the Gospel can be made intelligible to them."

Today, one might go even further and suggest that the Christmas story is likely more widely known than either Jesus'  cross or resurrection (especially the latter) and may offer not just a channel but almost the only channel through which the Gospel may be made intelligible to many!

For several years I tried to make it an annual Advent practice to review Brown's commentary in the days and weeks prior to Christmas. Then in 2012 Pope Benedict XVI came out with his own wonderful volume of meditations on the infancy narratives, a "dialogue with the texts," that asks the essential questions: "is what I read here true? dies it concern me? If so, how?" So, since then I have made it an annual Advent activity to re-read - with great profit - the Pope Emeritus' Jesus of Nazareth:The Infancy Narratives.

The first text Benedict treats is Matthew's account of Jesus genealogy (Matthew 1:1-17), which he treats together with Luke's alternative account (Luke 3:23-38) and with John's familiar Prologue (John 1:1-18). The latter is, of course, the Roman rite's Gospel for the principal Mass on Christmas, a text (that is, its first 14 verses) which also used to be regularly read at the end of every Mass - until the tragic abolition of that edifying practice by Pope Paul VI.

Not quite so tragic - but unfortunate nonetheless - is the omission of Matthew's genealogy of Jesus from the Sunday lectionary. As best I can tell, the only occasion when its reading is obligatory at Mass is today, December 17, this year the Saturday before the 4th Sunday of Advent.

(The intriguing question of what is omitted in our ostensibly expanded Lectionary is one which has begun to get more attention. See, for example, Index Lectionum: A Comparative Table  of Readings for the Ordinary and Extraordinary Forms of the Roman Rite, compiled by Matthew P. Hazell, 2016.)

Matthew's genealogy of Jesus, with its long list of unfamiliar foreign names, is obviously a challenge to read and probably appears boring to today's depleted attention spans. All the more reason, then, to engage the text seriously and carefully - for understanding who Jesus is, where he comes from, remains fundamental to any commitment to Christian discipleship. And Jesus' Jewish descent from Abraham and David is an essential component of who he is and where he comes from. God's choice of Abraham, who himself entered the biblical account at the end of a long genealogy (Genesis 11:26), represented a decisive turning point in salvation  history, as God covenanted with one particular family and the nation that descended from it in order to save the whole human race. At the same time, Matthew's account also - through the jarring inclusion of the names of four Old Testament women - heralds the Church's eventual mission to the Gentile world, the final fulfillment of the promise that through Abraham all the world would be blessed (Genesis 12:3).  In Pope Benedict's words, "through them the world of the Gentiles enters the genealogy of Jesus - his mission to Jews and Gentiles is made manifest." Finally, the account concludes uniquely with the mention of Mary, whose virginal conception of Jesus identifies her as "a new beginning" and jesus as "a new creation."

In this, as in so many matters, we would do well to learn from the Eastern Churches, with their tradition of celebrating the "Forefathers" of Jesus on the Sunday before Christmas.

We celebrate today the memory of the ancestors of Christ. sing with fervor a hymn of praise to Christ the Savior who magnified them among all  nations. He is the Lord who does wondrous deeds because he is powerful and mighty, and who shows us his strength through these Ancestors. The greatest of them all is Mary, the immaculate maiden of God, the undefiled one. From her Christ came forth to give life to all: eternal salvation and paradise without end. (Byzantine Vespers of the Forefathers of Jesus)