Joy in a Sad and Suffering World 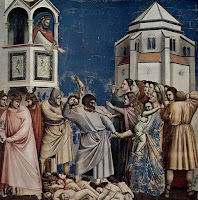 Of the five saints' days traditionally celebrated during this octave, only today's feast of the Holy Innocents has any direct connection with Christmas. Despite their obvious inability to give conscious witness to Christ, the infants massacred in Bethlehem (according to Matthew's Gospel) at King Herod's orders are treated as martyrs by the Church. Their feast is now celebrated as a feast of martyrs in red vestments. Up until the rubrical reform of 1960, however, it was celebrated in penitential purple and both the Gloria and the Alleluia were omitted. This suggests a more nuanced understanding of their martyrdom and a provides a perspective that is distinctive.

The Christmas story proclaims tidings of great joy for all people. But the story of the Holy Innocents situates that joy in the pain and suffering of our sinful world, where still today - in places like Syria, just a short distance from Bethlehem - innocent people, both children and adults, continue to be murdered in the interests of those who wield earthly power.

The frivolous pranks and jokes and similar customs traditionally associated with this day (sometimes called "Childermas" in English) are counterbalanced by the mournful beauty of the 16th-century Coventry Carol, which could just as well have been composed in a contemporary refugee camp.

Today's feast of the Holy Innocents re-situates the joyful Christmas story in our sad and suffering world and reminds us that the Incarnation is about the Word-made-flesh dwelling among us in the miserable mess which we have made of our world. It invites us to become in practice people to whom God has come and with whom he remains.