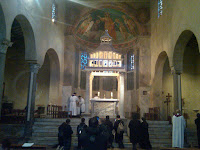 Five years ago, I got to spend the first half of Lent in Rome and so had the privilege of joining many others in the early morning tradition of Mass at the Roman stational churches, an experience I wish everyone could have and one certainly not to be forgotten.

As I wrote at the time: There is something so very special about going to these venerable Roman churches in the early pre-dawn darkness, walking literally in the steps of centuries of Christians who have visited those same churches on those same days, celebrating Mass surrounded by the relics and memories of martyrs, then emerging in the early morning light to continue one’s daily work. It is a true experience of the communion of saints! As the Italian Humanist Petrarch (1304-1374), describing his experience as a pilgrim in Rome in the Holy Year 1350, wrote: “How inspiring for a Christian to journey to that city which is like a heaven on earth, sanctified by the remains of martyrs beyond number, drenched in the precious blood of those early witnesses to the Truth.”

At that time, I was in Rome for three months taking at course at the Congregation of the Causes of Saints. My class met daily from 4:00 to 6:00 p.m., which left my mornings free for visiting churches, general sightseeing, and (once Lent had begun) the early morning Lenten stational Masses. One of our Paulist novices was also in Rome at the same time for his Lenten experience. So he and I would catch the bus at around 6:15 each chilly dark morning to go to that day's assigned church.

That meant we got to see a lot of churches that are seldom seen by tourists (or even by Romans, since some of them are seldom open to the public except on their stational days). For example, the second Lenten station, on the Thursday after Ash Wednesday, is at the Church of San Giorgio in Velabro, one of those wonderful ancient Roman churches that I would certainly never have gotten to see the inside of, were it not for the tradition of the Lenten stations. Located in a section of the city associated with the mythic infancy of Romulus and Remus, Rome's founders, the church itself has been associated with the soldier saint and martyr George since the 8th century. (The photo above was taken there after the early-morning English-language station Mass five years ago.)

The connection with the soldier and martyr Saint George may account for what was the traditional Gospel account for today - Matthew's story of the Roman centurion in Capernaum who entreated Jesus to heal his seriously sick servant and whose famous words, Lord, I am not worthy, we recite at every Mass before Communion. The Missal of Paul VI, in its eagerness to dump 1500 years of liturgical tradition, broke with the ancient Lenten lectionary and assigned different daily readings to many of the Lenten weekdays, without regard to the traditional stations. So today, instead of Matthew's story of the centurion, we will be hearing Luke 9:22-25 - Jesus' first prediction of his passion, which is certainly also appropriate at the beginning of Lent (and one whose image of spiritual combat the soldier and martyr Saint George himself would likely identify with at least as much as with the story of the centurion).

Nonetheless, there has been a genuine revival of interest in the Roman stations.  In addition to the principal (Italian) celebration each afternoon, other language groups also celebrate station Masses, at least on the weekdays. Hence the opportunity for me in 2012 to concelebrate at the English-language Masses, celebrated daily at 7:00 a.m., organized by the seminarians at the North American College. Not only priests and seminarians, but many other English-speakers living or working in Rome (including some ambassadors) participated and formed a uniquely vibrant congregation of several hundred Lenten pilgrims.

The end of my course and my responsibilities back home brought me back to America before the end of Lent. So I never completed that Lenten station journey. But just being there for the first half of Lent was still more than most people ever get to do, an opportunity for which I will always remain grateful.

(For further information about the Lenten stations, see the special section about them on the Pontifical North American College's website:
https://www.pnac.org/station-churches/the-roman-station-liturgy/)
Posted by City Father