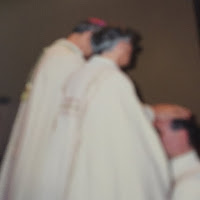 Since earliest times, the two Apostles Simon ("the Zealot") and Jude (the patron of hopeless cases, lost causes, and desperate situations) have been commemorated together on the same day in the Latin Church. In the Byzantine Liturgy, Simon is commemorated on May 10 and Jude on June 19. So there is obviously nothing date-specific about their joint celebration.Still, it is a very special day for me, the anniversary of my ordination as a priest at Saint Peter's Church, Toronto, on this date in 1995, and I have always treasured the connection with Saint Jude. What other date could possible have been more fitting!

Obviously I would happily have been ordained on any day! And there is certainly much to be said in favor of the older, historic Roman tradition of celebrating ordinations on penitential days, such as the four Ember Saturdays. Still, it was nice to have begun my priestly life and ministry on a feast of apostles.

In the words of the esteemed Pius Parsch:

"The apostles were made the foundation of the Church; in the liturgy they still continue that function. They are and will remain foundation-stones upon which the living stones of countless generations will be laid to form one mighty and glorious edifice. Such is the significance of feasts honoring the apostles. These days must be viewed sacramentally, i.e., as celebrations spread throughout the year which in themselves give grace and are effective in building up the Mystical Body of Christ."

The day after my ordination, I popped into the church to greet  people after the 9:00 a.m. Mass. At the end-of-Mass announcements, I heard Fr. Ernie say to the people about me, Incoraggialo (“Encourage him”). That they did! We all need encouragement, and to encourage others in turn. One of the things I have always found so attractive about the Acts of the Apostles is the picture it portrays of early Church life, how it highlights the mutual support and encouragement that the apostles and other 1st-generation Christians gave and received. As the saying goes, "it takes a village" to accomplish anything of value. Certainly, "it takes a village" to build up the Body of Christ in this world.