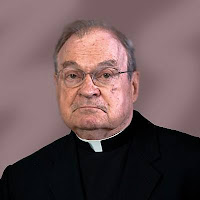 In the winter of 1982, just under six months into my Novitiate year with the Paulist Fathers at Oak Ridge, NJ, I was sent for my Lenten novitiate assignment to Saint John’s University Parish, Morgantown, West Virginia, where since 1956 the Paulist Fathers had served the campus ministry at West Virginia University (WVU). There were then three Paulists on the parish staff. The pastor was Chicago native, Fr. John Kenny, ordained in 1958, who died yesterday at Vero Beach, FL, and whom I remember therefore as my "first pastor" in my first Paulist pastoral experience. Until a week ago, John was still very active as a priest well into his 80s, capping a long life of distinguished service in pastoral leadership in several significant settings, which, in addition to Morgantown, included Grand Rapids, MI, Boulder, CO,  and Clemson, SC.
Morgantown was my only (and obviously very brief) experience of serving under John's excellent leadership, but I remember it well and remain to this day grateful for the great example he gave in his service to the Church and for his kindness and concern for  me during the short time we were together. In retrospect, its seems clear to me that my novice director and his assistant took the selection of each novice’s particular assignment quite seriously, sending each of us somewhere suitable to our individual needs at the time to learn, to be challenged, and also to do reasonably well. For me, Morgantown was such a place, and John was a first-rate mentor, who lived and modeled what he believed and taught. I loved my Lent there and retain a lifelong affection and respect for all three Paulist priests I was assigned to live with.
Among other things, John and I team-taught the children’s confirmation-preparation class, a challenging audience even back then! In terms of where I was personally and in relation to community life at that time, he also evidenced a practical no-nonsense style that helped me work through and get over some of my immediate worries and concerns that a novice like me was overly prone to worry about.
John was a good and effective priest, deeply devoted to his ministry and to the religious community of which he as a member, a man who read widely and cared deeply. His priesthood was a gift to the Church and to the Paulist Fathers and to the multitudes of people he served in so many . He will be missed and his memory treasured by many.