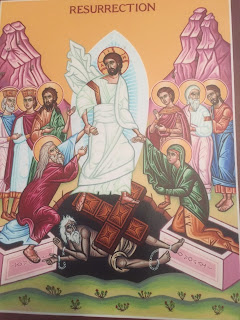 It happened early in the morning on the first day of the week.

Every morning is, in a sense, a new beginning, a chance to start over. Even so, in the normal course of events, the Sabbath day of rest would have been followed on the first day of the week by business as usual – both for the living, returning to their regular daily work, and for the dead, decaying in their graves, who (then as now) were expected to stay dead. Those who went to visit Jesus’ tomb early in the morning on the first day of the week presumably shared those same general expectations. The Gospel we just heard simply says that Mary Magdalene came to the tomb early in the morning. The other Gospel writers tell us that Mary was accompanied other women, and that their purpose in visiting the tomb was to anoint Jesus’ body. However many they were and whatever they expected to do, it seems safe to suggest that their expectations that morning were well within the range of the normal.

Instead, however, they found something surprising and unexpected. Mark’s Gospel, which we heard last night at the Vigil Mass, tells us about their surprising experience at the tomb and how they were told to tell Peter and the other disciples about it, which this morning’s Gospel informs us that they did. For this morning, this 1st day of the week, this Super-Sunday, the world awakens not to business as usual, but to something totally new – to, of all the things that God has ever done, the greatest of them all. And so we say today: This is the day the Lord has made! Let us rejoice and be glad!

Jesus’ resurrection was a historical event of the most monumental importance – more important even than the latest presidential tweet or the latest person to leave his or her White House job – the most important event in all of human history. And yet, however hard it may be for us to imagine (in this age of omnipresent media and the 24-hour news cycle), the resurrection was hardly even noticed at first.

Really important things are remembered for their long-term impact, not for the short-term noise they make. Maybe that is why none of the gospels give us an actual description of the event itself. Artists have tried to picture it, of course, but that’s art - highly imaginative art at that. We have nothing either visual or verbal that depicts the actual event of Jesus’ resurrection. What we do have, however, both visually and verbally, are the resurrection’s effects – first of all on the disciples, and then on the world, and finally on us.

The resurrection’s effects on the disciples are what we read and hear in the gospel stories of the visits to an empty tomb and then later of the appearances of the risen Lord – and still later in the preaching of Saint Peter and others in the Acts of the Apostles and in the amazing response of those who heard their preaching, and finally in the testimony and letters of Saint Paul, who wasn’t there at all at Easter, but who eventually experienced the risen Lord himself and was forever changed as a result.

Its effects on the world were soon evident in the enthusiastic response of Jews and pagans alike to the amazing story the apostles told. In the long term, its effects have been equally dramatic in how the story has spread and the Church has grown as a result, in the dynamism that is at the heart of the Church’s existence in the world and that has propelled it outward in almost 2000 years of world-transforming activity.

Finally, its effects are evident in us, transformed in mind and changed in heart, by the unique power of this utterly unexpected event, which has glorified (almost beyond recognition) the humanity Jesus shares with each of us, and which has brought us together in a way in which nothing else could have, empowering us not so much with new knowledge as with a new hope.

It is the resurrection’s long-term effects which we actually experience and which bring us here today – as Jesus’ body that lived and died and still forever bears the marks of his passion emerges from the tomb to transform our world, starting right here, right now, with us.

Even so, as we just heard, the first few to be made aware of this momentous news left the empty tomb more confused than elated: For they did not yet understand the Scripture that he had to rise from the dead.

Nor would we, if that were all we had of the story.

In a world which seems so permanently stuck in the dark, pre-dawn position, where death always seems to have the final say, the disciples needed to experience the kind of change that could only come from the Risen Lord’s living presence among them. And so do we, which is why we are here, where the Risen Lord brings us together as no one else can.

So, instead of the 1st day of the week condemning the world back to business as usual, this 1st day after the Sabbath is starting something new – not just a new week, but a new world, where death no longer has the final say. The resurrection is God’s powerful alternative to business as usual.  None of us were there that first Easter Sunday – and, had we been, we would surely have been as amazed and uncomprehending as the disciples themselves. But without yet understanding it, the world awoke on Easter to something totally new. We are here today, because God did not stop on the 7th day, because there is now a new day, on which God has, so to speak, re-created the world in his Son, Jesus Christ, crucified, dead, and buried, but now risen from the dead. That new day is today – and every day from now on, until we too will appear with him in glory [Colossians 3:4].

That is why we have to come back, Sunday after Sunday, to be filled in on what happened next and thus experience the effects of the resurrection ourselves. Like the disciples in the Gospel, some of us run fast. Others, beset perhaps by doubts or daily difficulties, run much more slowly. What matters most, however, is where we finally end up. So whether we are runners or walkers, we must accompany the disciples to the tomb, which in a business-as-usual world would have remained dark, but from which the stone has been removed – so we can see and believe.

Easter invites us put ourselves in the position of the disciples – and allow ourselves to experience something wonderfully and completely new in a world which seems so ordinary and old. Easter invites us to start living in the present that new and different future to which the Risen Lord is leading us.