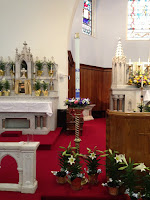 Some years back, an acquaintance who apparently takes more than an average amount of interest in churchy stuff (like the liturgical year, for example) remarked that Easter time is too long, that 50 days are just too much to sustain interest. I suppose he had a point. In our fast-paced world of truncated attention spans, impoverished rituals, and diminished imaginations, who has the time, patience, or interest for seven weeks of celebration? Even the Easter lilies have given up by now. As Americans, we are all addicted to celebrating everything in advance. Halloween candy is on display in the supermarket for at least two months. By Halloween, however, the shelves are already being restocked for Christmas. And so it goes, all year long.

But the Church – in her providentially counter-cultural wisdom – does the opposite. We hold off on celebrating until the day itself (or, in the case of Easter, the night before) and then keep on celebrating for weeks – weeks that to some may seem to drag on and on, apparently with no end in sight.

Part of the problem, of course, can be just figuring out what exactly we are celebrating for seven long weeks. Even the most symbolically challenged modern observer probably gets it eventually that there is something special about the number seven. Those in the know can elaborate endlessly on the season’s symbolic significance, historical antecedents, Jewish parallels, and so much more. At the end of the day, however, the question always remains. So what?

It probably happened naturally enough - once the Jewish Passover had been reinterpreted as the Christian Easter - that the 7-week period from Passover to Pentecost reappeared as the Easter season. As the rapidly growing Church organized its initiation rituals, this acquired the eminently practical purpose of providing the newest members – those baptized at Easter – time to understand their experience and better appreciate what it meant for the rest of their lives. In effect, Easter time exists precisely to answer the question, So what now?

That is why the Church reads every day during this season from the New Testament book called the Acts of the Apostles, the sequel to the Gospels’ story of Jesus’ life, and thus the ongoing story of the Risen Christ’s continued life and work in the world, as experienced in his presence and action in his Church. Who better to answer our So what? Question than the 1st Christian generation, whose exciting experience the Acts of the Apostle recalls for us?

Today’s 1st reading [Acts 3:13-15, 17-19] is an excerpt from Peter’s 2nd sermon. He may have been new at his job, but he was already quite good at it. He got right to the point of what had happened and why it mattered. He outlined and summarized the central tenets of Christian faith – the significance of Jesus’ life and mission, how his death has revealed him to be God’s suffering servant, how his resurrection confirms him as the anointed one, the messiah, the Christ, promised by all the prophets, all of which challenges us to repent and be converted.

How to do this John elaborates in our 2nd reading [1 John 2:1-51], another standard Easter season staple. Jesus Christ the righteous one is our Advocate with the Father and expiation for our sins and for those of the whole world. And the way we may be sure that we know him is to keep his commandments – being transformed, truly perfected in him by conforming ourselves to the truth of his words.

Obviously, that may be easier said than done! Like the disciples in the Gospel [Luke 24:35-48], we may all be more than a bit startled and terrified by the realty of the Risen Christ and his challenge to our lives.

And that is why we must meet - as the disciples did, as the early Christians did, as Christians of every time and place have done – every 1st day of the week, to re-encounter our Risen Lord, listening together with one another, learning together with one another, here at the altar where the still wounded but forever living Lord promises us his peace as he feeds us with his own Body and Blood.

As Pope Francis has just recently reminded us, in his Apostolic Exhortation On the Call to Holiness in Today’s World, Growth in holiness is a journey in community. Side by side with others.

It has often been remarked that the change in Jesus’ original disciples – from self-absorbed individuals, confused, scared, and hiding from the world, into a community of convinced and confident disciples, who would become a world-wide Church – was the most visible and dramatic human effect of the resurrection.

So that is why we have to come back, Sunday after Sunday, to be filled in on what happens next, to learn how to make our own the experience of those 1st Christians. In the early 5th century, the North African bishop Saint Augustine famously told the newly baptized members of his congregation: When you were baptized, it is as though you were mixed into dough. When you received the fire of the Holy Spirit, it is as though you were baked. Be what you can see and receive what you are. Be a member of the Body of Christ in order to make your Amen true. [Sermon 272].

Ultimately, that is the task of a lifetime in the Church, the slow transformation of our lives into the offering the Risen Christ makes to God on our altar today.. These seven weeks are barely long enough just to begin – just to begin to make our own the story of those 1st Christians and so discover the real difference the Risen Christ can (and does) make among us, right here and right now.