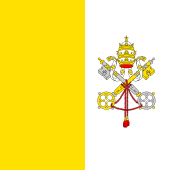 After the ecclesiastical debacle of the French Revolution, Pope Pius VI made peace with a calmed-down post-revolutionary France, negotiating a Concordat with Napoleon in 1801, which remained in effect through various French regimes until the secularist government separated Church and Sate in 1905. The Concordat with Napoleon reconciled the Catholic Church with post-revolutionary French society, restoring the Church to legal status. The.Church lands and endowments that had been confiscated by the revolution were not returned, but Catholic clergy in exile or underground were able to return to the (now state-owned) churches, and the public practice of Catholicism was once more legal.  Although Napoleon and his successors remained very involved in the appointment of bishops (as had his predecessors "the Most Christian Kings" of France), Napoleon relied on the Pope to reorganize and reduce the number of French dioceses, thus paradoxically increasing papal power within the French Church, inadvertently perhaps weakening the traditionally anti-papal "Gallican" tendencies in the French Church.

The Church's successful peace with post-revolutionary France at the start of the 19th century seems a relevant model to recall as the Church seems poised to make peace with a somewhat similarly calmed-down China some 70 years after its revolution. No two historical cases are the same, of course. Unlike France in 1801, Catholics remain a minority in China, and the history of the Church in China is very different from its experience in historically Catholic countries like France. Also the "provisional agreement" (the full details of which are still not completely clear) falls short of any restoration of diplomatic relations. Still by apparently allowing the Church to function publicly and legally in China, under the leadership of Bishops in communion with Rome, this "provisional agreement" may represent a major breakthrough, every bit as historically significant for the Church's future as Pius VI's Concordat with Napoleon in 1801.

The "price," if one must put it that way, for this was papal recognition and acceptance of the illicitly ordained Bishops of the schismatic "Patriotic Church."  Church unity and avoidance of schisms has always ranked high among the Church's priorities, and rightly so. Hence the importance of bishops being in communion with the Holy See, something which until now has been problematic for the Chinese government which has treated papal participation in the appointment of bishops as foreign interference in internal Chinese affairs.

The issue is not per se the involvement of the government in the selection of bishops. The historical reality is that governments have more often than not been involved in that process. At the time of the agreement with Napoleon, probably the only bishops appointed by the Pope exclusively without reference to the civil authority were in the Papal States (where, of course, the Pope was the ciivl authority) and in the newly independent United States with its idiosyncratic constitutional regime regarding religion.

By another historical irony, it was the 1871 Italian Law of Guarantees (adopted after the Italian conquest of Rome from the pope) that gave the pope the right to choose the 237 bishops of the Kingdom of Italy. Until then, the various rulers of pre-unification Italy had made the appointments (with confirmation by the pope). The 1905 French law repudiating the Concordat and separating Church and State likewise had the paradoxical effect of giving the pope greater freedom in appointing bishops in France and the overseas territories ruled by France. A century later, we now take it for granted that in almost all countries the Pope can freely appoint bishops as he chooses. Hence the provision in the current Code of Canon Law (Canon 377 §1): The Supreme Pontiff freely appoints bishops or confirms those legitimately elected.

But it would be a denial of history not to recognize that, until recently, civil society having a major or even predominant role in the appointment of bishops has been more or less the norm. And it still is in certain situations. Since 1996, for example, this has been the norm in Vietnam, where the Holy See proposes three candidates from whom the government selects one. As with the Concordat with Napoleonic France, which facilitated a vibrant rebirth of French Catholicism after one of the greatest disasters in Church history, these are adaptations to Church procedures that serve the interest of Church unity and ecclesial communion among bishops in the ever-changing context of modern States, which may increasingly view the Church as an outsider to society.