"Defend Us in Battle" 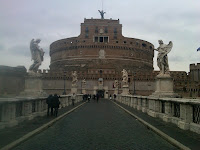 In 1957, as a nerdy nine-year old, I chose Michael for my confirmation name, because I was attracted by the bellicose militaristic image of Michael the Archangel in the prayer then regularly recited as part of the so-called “Leonine Prayers for Russia” recited after Low Mass: Saint Michael the Archangel, defend us in battle. Be our defense against the wickedness and snares of the Devil. May God rebuke him, we humbly pray, and do thou, O Prince of the heavenly hosts, by the power of God, thrust into hell Satan, and all the evil spirits, who prowl about the world seeking the ruin of souls.

The origin of those so-called Leonine Prayers dates from 1859, when Leo's predecessor, Blessed Pope Pius IX, faced with the growing prospect of Italian unification and its imminent threat to the papacy’s temporal power over the central Italian Papal States, prescribed certain prayers to be recited after Masses celebrated in those territories. In 1884, in the context of the continued conflict between the Holy See and the now unified Kingdom of Italy, Pope Leo XIII ordered that those prayers be recited throughout the world. Two years later he added the now familiar Prayer to Saint Michael the Archangel. The Papal States were never really recovered, of course, but in the 20th century Benito Mussolini managed to solve the long-festering conflict to the satisfaction of both sides. So, after the 1929 reconciliation between the Holy See and the Kingdom of Italy, Pope Pius XI directed that the prayers should continue to be said but with the new intention for the Church in Russia.

Those "Leonine Prayers" were required to be recited only after Low Mass. In the United States at that time, however, Low Mass had de facto become the most commonly experienced form of Mass for most lay Catholics. With the effective end of Low Mass after Vatican II, however, the 1964 Instruction Inter Oecumenici suppressed the obligation to recite those prayers. Even so, the Prayer to Saint Michael the Archangel has remained popular and is presently experiencing a certain resurgence in its popularity and usage.

Today, of course, is the feast day of Saint Michael the Archangel, traditionally known in the English-speaking world as Michaelmas.  (In our contemporary calendar, Michael shares the feast with the other two biblical archangels, Gabriel and Raphael, which effectively only diminishes the attention actually given to those other two, who previously each had a feast of his own.)

Michael is mentioned three times in the Old Testament Book of Daniel, which identifies him as Michael the great prince, the protector of your people. According to Jewish tradition, Michael acted as Israel’s advocate and defender against the guardians of other nations and particularly against the evil angel who was Israel’s accuser. That tradition is reflected in the New Testament Book of Revelation, chapter 12, which describes a war in heaven in which Michael and his angels defeats Satan, the deceiver of the whole world. Jesus himself, without mentioning Michael, seemed to be referring to this when he said that he had watched Satan fall from heaven like a flash of lightening (Luke 10:18).

According to Revelation, Satan and the other fallen angels, having been cast out of heaven and thrown down to the earth, continue there to make war on those who keep the commandments of God and hold the testimony of Jesus .The New Testament Epistle of Jude recounts another Jewish tradition according to which Michael fought the devil when he tried to claim the body of Moses, and said to the devil The Lord rebuke you!

Catholic tradition celebrates an apparition of the Archangel Michael on Monte Gargano in Italy at the end around the year 490 and used to commemorate that liturgically in another feast of Saint Michael on May 8.  Michael was also said to have appeared in 708, asking for a church to be built on what is now known as Mont Saint-Michel, which remains a pilgrimage site to this day. Most famously, he is supposed to have appeared with a sword over the Roman mausoleum of Hadrian in 590 during a devastating plague. To celebrate that event and the end of the plague, Pope Saint Gregory the Great renamed the building Castel Sant'Angelo, the name by which it is still known today (photo above, taken by me in 2012).

So it is hardly surprising that this great Archangel should continue to be invoked throughout the Church, especially in times of trouble.