The Nativity of Mary 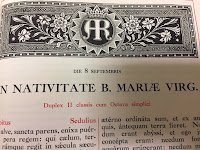 Today is the feast of the Nativity of the Blessed Virgin Mary, one of the more ancient feasts of the Church.

The New Testament is silent on the subject of Mary's life prior to the Annunciation. The earliest known account of Mary's birth is found in the Protoevangelium of James a non-canonical, "apocryphal" - Raymond Brown called it "obviously folkloric" - text from the late second century, which identifies her parents as Saint Anne and Saint Joachim. With most saints, the Church commemorates their date of death. By exception, the births of Mary and Saint John the Baptist are commemorated, because these alone were holy in their very birth. (Mary was conceived free from original sin, and John the Baptist was sanctified in Elizabeth's womb according to the traditional interpretation of Luke1:15). The liturgical commemoration of Mary’s birth is connected with the dedication of an ancient fifth-century Marian Basilica in Jerusalem, now known as the Church of Saint Anne. Built on a site traditionally identified with the home of Saints Joachim and Anne.

In the 7th century, Pope Sergius I prescribed a procession (in which the Pope and the clergy participated barefoot) to the Basilica of Saint Mary Major on what were then the four great Marian feasts in the Western calendar - Candlemas Day (February 2), the Annunciation (March 25), the Assumption (August 15), and today's feast of Mary's Nativity. The procession assembled at the Church of Saint Hadrian in the old Roman forum, a former meeting place of the Senate consecrated as a church by Pope Honorius I earlier in the 7th century, probably on this date.(Saint Hadiran continued to be commemorated in the Roman Liturgy on this date until 1969.)

The famous 20th-century liturgist Pius Parsch described today's feast as "close to our heart, for as members of God's great family we love to celebrate family events; today is our Mother's birthday." Adults may find that formulation odd, but in a certain sense the liturgy itself highlights the familial dimension with the Gospel reading of Matthew's account of the genealogy of Jesus. Matthew's genealogy of Jesus is fun to proclaim but perhaps less fun to preach on. Nonetheless, Matthew must obviously have seen it as a very significant and meaningful way to introduce the story of Jesus. So it seems especially suitable for this feast, which serves as a kind of prelude to God's great masterwork, the Incarnation.