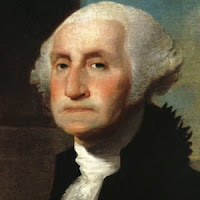 Today is George Washington's 287th birthday. Back when I was in school, it was a holiday. It may be just another ordinary day now, but it is still certainly a suitable occasion to reflect upon Washington's greatness of character and how he molded the office of the presidency - and how far that office has fallen in character and dignity now, 45 presidents later. One simple point of comparison, which says so much is just a few words (something Washington was good at) was our first president's famous letter to the Jews of Newport, RI, which includes the following still very relevant sentiments:

If we have wisdom to make the best use of the advantages with which we are now favored, we cannot fail, under the just administration of a good government, to become a great and happy people.

The citizens of the United States of America have a right to applaud themselves for having given to mankind examples of an enlarged and liberal policy—a policy worthy of imitation. All possess alike liberty of conscience and immunities of citizenship.

It is now no more that toleration is spoken of as if it were the indulgence of one class of people that another enjoyed the exercise of their inherent natural rights, for, happily, the Government of the United States, which gives to bigotry no sanction, to persecution no assistance, requires only that they who live under its protection should demean themselves as good citizens in giving it on all occasions their effectual support. …

May the children of the stock of Abraham who dwell in this land continue to merit and enjoy the good will of the other inhabitants—while every one shall sit in safety under his own vine and fig tree and there shall be none to make him afraid.

May the father of all mercies scatter light, and not darkness, upon our paths, and make us all in our several vocations useful here, and in His own due time and way everlastingly happy.