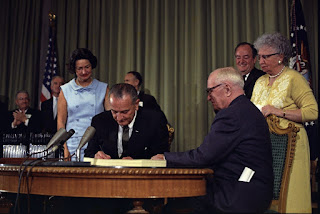 Pete Buttigieg, the charismatic young Mayor of South Bend, who is sounding more and more serious as a presidential candidate, recently said in an interview for The New Yorker, "It is very pragmatic to look around and say, well, the countries that do this [universal health care] tend to be better than the countries that don't. the system we have isn't working very well, we ought to try this other system. Politically, it's never been possible, because it's been considered socialism, and socialism was a kill switch. Our generation did not live through the Cold War in the same way" (Benjamin Wallace-Wells, "Pete Buttigieg's Quiet Rebellion").

Well, I did live through the Cold War, and the targeting of one's opponents ideas as "socialism" long ago ceased to be "a kill switch" for me, if ever it was. The unhinged antipathy to "socialism" presently permeating right wing media may perhaps represent an honest historical ignorance of the multitude of differences between European social democracies and the Soviet Union under Stalin, or it may more likely merely reflect an incurable ideological obsession. Either way, there is no reason in 2019 for the rest of society to be cowed by it.

First proposed by President Harry Truman, then again by President Kennedy, Medicare was finally signed into law by President Lyndon Johnson in 1965 (photo). Its passage was possible thanks to the great 1964 Democratic landslide, which provided enough support in Congress to override the "kill switch" in the form of the nonsense then being peddled by the likes of Ronald Reagan (soon to run for governor of California), who said it would "invade every area of freedom in this country until one day ... we will awake to find that we have socialism."

How strange this pervasive (and persistent) animus against providing people with adequate health care, even after any practical arguments had been refuted by the nearly universal experience of other advanced economies!

LBJ couldn't get universal health care, but at least he got something for seniors (Medicare) and for the poor (Medicaid). It has been suggested that he had hoped gradually to lower the age for Medicare and might have gone in that direction had it not been for Vietnam. We know that President Nixon also contemplated lowering the age and universalizing medicare in 1973, but that that too got derailed. So "Medicare for All" is not a novel notion at all.

But "Medicare for All" is just the method, just a way to get to universal health care. The latter is the goal, the end. The former is merely the means - albeit the most obvious means given our history and present circumstances.

Given that history and our present circumstances, President Obama accomplished a great deal with the Affordable Care Act, and our country is a better place as a result. Even so, the goal of universal care still eludes us, even as the cost of health care continues to rise, and private insurers still continue to profit, all of which could be fixed by something like Medicare for All, which would cover everyone, for less than we are all paying now, and without enriching private insurers, What's not to like?

The inevitable red herring in any debate about universal health care is, of course, taxes, a perennial problem in a society which is chronically resistant to the concept of community and the shared burdens community calls for. Even so, what needs to be stressed in any serious political advocacy is that the increased taxes which would be necessary to pay for universal health care would replace the more expensive present system of insurance premiums, deductibles, and co-pays.

Yet one obvious obstacle to universal health care remains the fact that some significant segment of the population already believes it has satisfactory health care in the form of private insurance, which, for all its cost and other inefficiencies and its unfairly distributed burdens, works well enough for some to make them afraid of trying something different. Such people are then obvious and easy targets for the scare tactics of the insurance industry and others apposed to universal health care. (This is so despite the obvious fact that Medicare itself works quite well, and most people know that, as reflected in Medicare's widespread popularity.)

So, as a practical matter, I think that pragmatic proponents of universal health care ought first of all to keep the conversation focused on universal health care, not on this or that means to that end. Pragmatically, they should be advocating a  progressive reduction in the Medicare age over a finite period of years for those who wish to avail themselves of it, without immediately altering anyone's existing private insurance - in other words keeping the Medicare system we already now have for some but extending its benefits over time to many more, meanwhile allowing private insurance to continue but hopefully to diminish in importance as it is needed by fewer and fewer citizens,