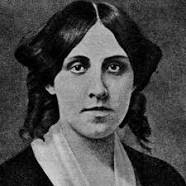 In October 2008, a group of us took a tour of certain sites in the Boston area associated with the early, pre-conversion life of Paulist Fathers' founder Isaac Hecker.  One such site was Fruitlands, a utopian transcendentalist community founded by Bronson Alcott and Charles lane, where Hecker, hoping for a more ascetic life than what he had experienced for several months at the transcendentalist community at Brook Farm, was very briefly a somewhat dissatisfied resident in 1844. While there, he met Bronson Alcott's young daughter Louisa May Alcott (photo), who later published an account of Fruitlands' somewhat less than successful story in Transcendental Wild Oats (1873). Louisa May Alcott, of course, grew up to write the perhaps also somewhat semi-autobiographical novel Little Women (1868-1869) about the four March sisters, that has since become an enduring American classic. It has seen seven film adaptations, as well as several made-for-TV versions. I first saw it in the 1933 movie version, which I saw on  our original black-and-white TV sometime in the late 1950s or early 1960s.

Now, this much loved literary classic has been made into yet another movie, released appropriately on Christmas Day. The book famously begins with the lament that Christmas won't be Christmas without presents - a vacuum this book has well filled for 150 years. Now this beautiful and uplifting film may do the same for a new generation of audiences.

Directed by Greta Gerwig, it stars Brooklyn's Saoirse Ronan as Jo, Harry Potter's Emma Watson as Meg, Florence Pugh as Amy, Eliza Scanlen as Beth, with Laura Dern as Marmee, Timothée Chalamet as Laurie, and  Meryl Streep as Aunt March. With a cast like that, who can complain?

Fresh and vibrant, this film is faithful enough to the Alcott's timeless story. It is a visually delightful evocation of that extremely familiar place and time in American history, with enough of a nod to contemporary preoccupations to please those seeking a more modern sensibility.

Instead of leading us sequentially through the familiar story, the film follows its own chronology, constantly flashing back and forth between earlier and later events. I wonder whether someone unfamiliar with the story might find it challenging at times to keep up with where in the sequence the film actually is at any moment. On the other hand, for probably most of the audience, already familiar with the story and the development and fates of the various characters, this is likely not much of a problem and may in fact contribute to this adaptation's novelty and freshness.

And, of course Jo does indeed find love in the end - and also gets her book published. So the two - at times seemingly competing - trajectories of her life both find fulfillment, as Alcott's readers and the movie's audience all would want!