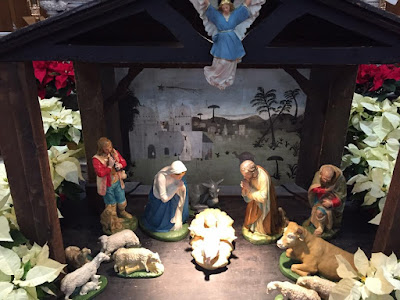 The feast of the Holy family is a modern invention – much like the 19th and 20th century nuclear family it may seem to some to romanticize.

Families come in all kinds and shapes and sizes, and the forms family takes have evolved over time, and have evolved especially dramatically just in our own lifetimes. That said, everyone begins life, biologically at least, as a member of a family. And family life in some form has almost universally been the basic unit of social organization, and for most people the focus of their day-to-day lives. Even those of us without families of our own treasure our extended family connections and family-like connections.

One of the striking things about God’s relationship with the human race, as revealed in both the Old and the New Testaments, is how it is largely a series of family stories - beginning with the creation of a family, from whom the whole human race is descended. After several generations, during which things seem to go from bad to worse, God singles out one particular family to be his agent for renewing his promise to the entire human race. The rest of the Old Testament follows the story of God’s promises to Abraham’s and Sarah’s descendants, culminating in the New Testament in the homeless, refugee immigrant family, known to us today as “the Holy Family.”

We’re all familiar with countless artistic portrayals of the Holy Family. It’s safe to say there are more portraits of the Holy Family than of any ordinary family. And, of course, we have them here on display in the familiar Christmas scene. Such nativity scenes invite us to appreciate the circumstances of Christ’s birth, to consider the concrete reality of God becoming one of us, a human being like ourselves. “The nativity scene.”  Pope Francis has reminded us, “is like a living gospel rising up from the pages of sacred Scripture.”

Indeed! But, of course, nativity scenes are also somewhat artificial. The figures appear frozen in time. All the participants who came and went at different times in the actual story all appear together and seem stuck in one moment. And, of course, we have so sentimentalized the story that, even though we are staring at a less than optimal setting in which to give birth under obviously sub-standard conditions, we hardly think at all about that aspect of the story.

And yet, if we but read the Christmas story as told by Matthew and Luke – certainly if we do so without passing it though the filters of holiday sentimentality, if we read it as it was originally written to be read – then what do we find? A young unmarried girl is inexplicably pregnant. Her fiancé marries her anyway, based on a dream he had. She gives birth far from home, in a cave, with some animals for company and some strangers for visitors. In the ancient world – indeed for much of human history in most of the world – childbirth was a dangerous, life-threatening experience. Assuming mother and child both made it safely through that, there were further threats in the form of diseases that carried away both rich and poor. And, of course, most people were poor, and so everyone in a typical family – adults and children – lived close to the margin, often hungry or in danger of becoming so.

And if you were poor – then as now - you were almost certainly also politically powerless, and that could pose problems too – as it definitely does for the Holy Family in today’s Gospel reading, which reminds us how, born in poverty far from home, Jesus’ very life was soon threatened by political violence and his family forced to seek asylum as political refugees. It should not challenge our imagination to picture the Holy family’s situation. Our contemporary world is full of political refugees. We think of the especially tragic situations in the Middle East and parts of Africa and all the people whom those conflicts have displaced, perhaps permanently. Meanwhile, right here in our own country, we also have immigrants who came here to escape political persecution or oppression. That’s what Jesus, Mary, and Joseph had to do, immigrating to Israel’s ancient enemy Egypt, to escape King Herod the Great’s “killing fields.” But, unlike our government, Egypt welcomed them. Nor did it forcibly separate the parents from their child, as our supposedly Christian country has done.

Many families – then as now – experienced similar problems. The Incarnation wasn’t some sentimental novel.  When for us and for our salvation he came down from heaven (as we say so routinely in the Creed), it was for real. God became one of us, part of our world, a member of a family, a family struggling to make ends meet from crisis to crisis.

I remember a friend of mine, talking to me about the challenges of being a parent, saying that he thought the fact that the human race has survived at all is itself a tribute to how families have struggled, stuck together, and pulled through.

Of course, the Holy Family had some special help – Joseph’s dreams, for example. But, if the Incarnation means that in the Holy Family God himself has experienced and identified himself with our lifelong stresses and insecurities, then the corollary also follows from that – that God is present with us too, to sustain us in our stresses and insecurities. And even without any special dreams, we do have God’s word directing us to stick together and support one another – in good times and bad. We have God’s word directing us to put on, as Paul says, heartfelt compassion, kindness humility, gentleness, and patience, bearing with one another and forgiving one another.